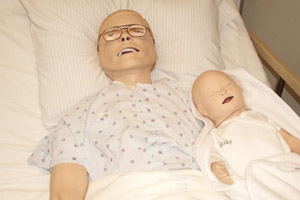 Bert Simmons’ sickly face stares up from a hospital bed in a spacious room. Nearby, a baby in a white onesie lies in an infant warmer unit.

“They’re not very beautiful,” laughs Nancy Tucker, chair of the Pacific Union College nursing department, as she looks at the two $30,000 manikins in the nursing Simulation Lab.

The adult patient simulator arrived in August of 2005 and took up residence in a space that is now called the Simulation Lab. The lab has undergone a series of developments and improvements, including the recent addition of the SimBaby infant manikin. The purpose of this area is to provide a realistic hospital setting in which students can practice their nursing skills on high-tech manikins—a resource that nursing programs are utilizing more and more as clinical time in hospitals is harder to come by. “We feel that this is the wave of the future,” says Tucker.

The lab houses the manikins in hospital beds, their compressors and monitors, and a control room on the other side of a one-way window, where instructors manipulate the manikin’s reactions, including changes in heart rate, respiration, and vocal responses. The lab space also includes a mock nurses’ station set up with white cupboards and drawers and a phone to the control room, and an assortment of typical hospital equipment, such as a “crash cart” for emergency scenarios.

Joan Hughson, who coordinates the department’s Skills Lab, has worked hard to make the setting and equipment in the Simulation Lab as realistic as possible. “Right now the one adult manikin that we own appears to be a male in his twenties,” she explains. “This manikin, however, must play every role needed for our scenarios.  This means that he may be exactly as he appears, or, with some added props, he becomes an elderly man, a middle-aged woman, a pregnant female ready to give birth, someone with an amputated limb. I even have a spiked fluorescent green and black wig for him to wear and stick-on tattoos!” This makes the experience more interesting for students, but also more relevant. “By changing anatomical parts and names, using wigs and a variety of accessories, we try to bring an authenticity to the patient being treated by the students,” Hughson says.

The lab had its start when the nursing department launched a fundraising campaign with nursing alumni to acquire SimMan. The college also provided funding for that initial purchase. The department gradually worked to upgrade the lab, but this year the lab took a huge step forward with the acquisition of SimBaby and improvements to equipment; these were completely funded by the Archie Tonge Education Fund.

The Tonge Fund was established in 1983 by the sons and daughters-in-law of Dr. Archie Tonge, a PUC alumnus and medical doctor who served in the U.S. Army during World War I, established Adventist hospitals and clinics in Africa, and founded Modesto City Hospital. “The Tonge Board is committed to supporting innovation, excellence, and leadership in schools,” says John Collins, who has served as the Board’s CEO for five years.

The Fund, which supports Adventist schools primarily in Central and Northern California, has contributed to PUC by funding the fiber network for high-speed computer access on campus, serving as a major donor in the construction of Chan Shun Hall, and assisting in many other projects.

“In approving the grant proposal for a simulation lab in the nursing department, I can say that the Archie Tonge Education Fund board was delighted in the concepts included in the proposal and believes that the lab will strengthen the nursing program at PUC,” says Collins.

Already the lab plays a significant role in the department, which is working with the Board of Registered Nurses to allow for more of students’ clinical hours to be completed in the Simulation Lab. Shana Ruggenburg, ADN coordinator for the department, is currently working to integrate the Sim Lab into every section of the nursing students’ training, with every teacher developing lab scenarios for each quarter. The feedback has been good: “Students have been very positive,” Tucker says. “It gives them more confidence with what they can do.”

The simulated scenarios are the perfect opportunity for students to get hands-on but risk-free practice. “They get to try things a little more on their own than they might be able to with real patients,” says Ruggenburg. “It’s a little less scary!”

Students are then more capable and self-assured when they get out on a real hospital floor. “Nursing educators want students to have as realistic training as is possible on campus so that they are better prepared to care for real patients in the clinical setting,” says Hughson.

The college has also made the lab, a valuable local resource, available for in-service training for St. Helena Hospital and recertification for the region’s ambulance company. “We want to make sure that this resource is also benefiting the community,” says Tucker.
Next Article