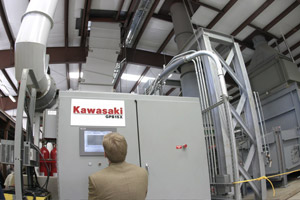 A massive project for the college, and representing the cutting edge of forward-thinking energy production, the cogeneration plant has garnered its fair share of local and not-so-local attention. The grand opening was attended by officials from Trane, Kawasaki, Titan, and Patch Services, all companies involved in various ways in the construction and powering of the new plant. Members of the local community, media, and Napa Valley Advisory Council also joined college faculty, staff and students in the opening ceremonies and plant tours. In addition to PUC’s administration, Kelly Bock of the Pacific Union Conference spoke briefly at the opening, and Diane Dillon gave the keynote address.

The cogeneration plant is, as Dillon summed it up, “Clean, clever, and climate smart.” It uses a 1,400 kilowatt Kawasaki turbine generator, unparalleled for its low emissions levels, to supply the majority of the college’s electrical needs. Recovered waste heat will also be used to supply the campus with heating and air conditioning.

In using the cogeneration plant to produce its own power, PUC gains not only a more stable and environmentally friendly power supply but also immense financial benefits through the high efficiency of the plant and a 10-year fixed rate on natural gas.

In his prayer of dedication, PUC church senior pastor Tim Mitchell eloquently expressed the college’s desire that this power source be used not merely for powering things like lights and hair dryers, but for providing the college and community with a quality of life that enhances belonging and effective service.
Prev ArticleNext Article