A Job for Everybody: Local Heroes Make a Difference 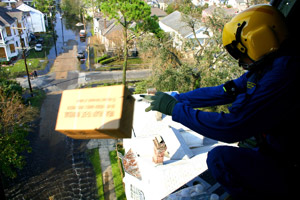 From nurses to music professors, volunteers of every skill and background are welcomed into disaster relief teams. So as aid continues for thousands of hurricane victims, an assortment of Angwin residents have found ways to get involved.

As a campus and community, Angwin and Pacific Union College responded to the disaster by raising funds, coordinating a drive for personal kits, and offering tuition assistance to affected PUC students and free tuition to students of colleges that were closed as a result of Hurricane Katrina.

But there were also faculty, staff, students and alumni who got directly involved in the relief work. David Krussow, a PUC nursing alumnus, was deployed in New Orleans with the Texas Taskforce Team One (TxTFT-1). Krussow, who works as a flight nurse with STARFlight in Austin, was part of a six-helicopter unit that rescued over 6,800 victims and delivered over 2000 cases of food and 2000 cases of water in nine days. “[The relief work] was an operation of unimaginable magnitude,” he says. “While the looters and shooters garner all of the attention, let me reassure you that heroes do still exist. I could tell story after story of ordinary people performing extra-ordinary acts at high cost to themselves day after day after hot, miserable day.”

As Krussow and the others in his crew worked over the city in helicopters, feelings were intense. “Every rescue had its emotional high; every person or animal that we had to leave, its low,” he recounts. “ We quickly became hopelessly unable to ‘keep up with our own emotions’ and just had to go on doing what we were there to do.”

Another PUC nursing graduate found herself at the Houston Astrodome. Kortney Hyrchuk worked in various areas, including a pediatric clinic and a walk-in clinic. “I wished I could do more,” Hyrchuk recounts. She asked God to help her see how the small bit she contributed was really making a difference. It wasn’t long before her answer came; she just “happened” to be in the right place at the right moment to use her neonatal nursing training to save the life of a baby.

In addition to her medical skills, Hyrchuk found that the people in the Astrodome just needed support. “Much of the time was spent just sitting and letting people talk.  Letting them tell their stories.  Letting them know that they were important and worth listening to.”

PUC faculty and staff also donated their time and skills as volunteers.

Marsha Crow, who is the education department’s credential analyst, was sent to a long-term Red Cross shelter in Monroe, Louisiana. Since she had office and organizational experience, Crow spent her 12-hour shifts managing the shelter’s database, entering registration information that helped the center keep track of information such as the occupants’ medical and mental health needs, where people were staying, and how many meals were needed. Crow also spent some time out “on the floor,” helping new people move in and interacting with the inhabitants. “I came home with tremendous empathy for people who are suffering and with more gratitude in my heart for the blessing I have in family, home, and work,” Crow says.

Music professor LeRoy Peterson, meanwhile, was stationed in Reserve, Louisiana, and went into New Orleans each day to pass out such supplies as food, water, bug repellent and flashlights to people still living in the city.

Jim Snook of the custodial department became involved in the Hurricane Rita relief effort in Texas. His tasks there included driving trucks to affected towns to distribute food, water and other supplies, working in a community kitchen, and coordinating a distribution center in Woodville.

Regardless of their backgrounds, these and so many other individuals have found that their skills, their hard work, and their hearts are much needed in serving those who are struggling. Their willing services should be an inspiration to all of us in supporting each other through rough times.
Prev ArticleNext Article