“The Broken Gospel:” Week of Prayer with Chaplain Kent Rufo 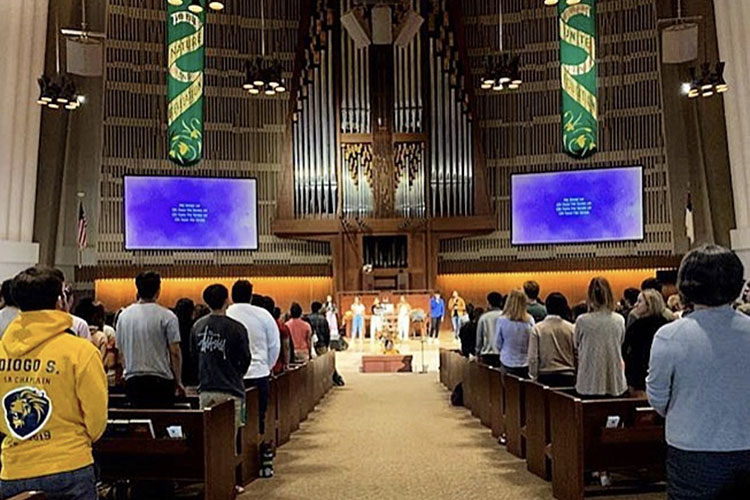 Pastor Kent Rufo led this fall quarter’s Week of Prayer with a powerful sermon series entitled, “The Broken Gospel.” Held in the PUC church, students gathered each morning of the week for an hour of worship, community-building, and scriptural study.

Beginning with Monday’s service, each meeting built upon the previous day’s message. Pastor Rufo quoted from Revelation 21:4, and explained his sermons rested on the premise found in the verse which holds that God ultimately wishes to do away with death, sorrow, crying, and pain. He noted that we all live in an imperfect world, plagued by these difficulties, and part of our journey as Christians involves learning how to navigate through these troublesome issues.

Pastor Rufo continued on Tuesday with the assertion that, as humans, we all cope. He listed a variety of “numbing agents” people typically turn to, but concluded the only true healing comes from God. He explained, “We only have one healer, and everything else is simply a substitute for true healing.”

Wednesday expanded this concept of healing to the Gospel, and Pastor Rufo explained the good news, or the essence of the Gospel, is that Jesus willingly became our brokenness so we would not suffer under its weight for eternity. This translated easily to Thursday’s message regarding the necessity of God’s laws as protection against further fracturing of our hearts and souls.

Friday’s message detailed “God’s balm,” or the modes of healing God has given to us until He returns. Pastor Rufo cited Mother Theresa as the embodiment of what it means to love God and love people.

“Our sole purpose as Christians is to be a balm for broken people—to love the unwanted, unloved, and uncared-for,” he concluded.

Friday’s Vespers served as the closing event for Week of Prayer, in which Pastor Rufo reiterated the week’s messages. He highlighted the vital importance of forgiveness, saying that healing cannot take place until we let go of the hurt that we have experienced.

“We are the worst at forgiving ourselves,” Pastor Rufo concluded. “But that’s where grace abounds. We’ve already been forgiven by God.”