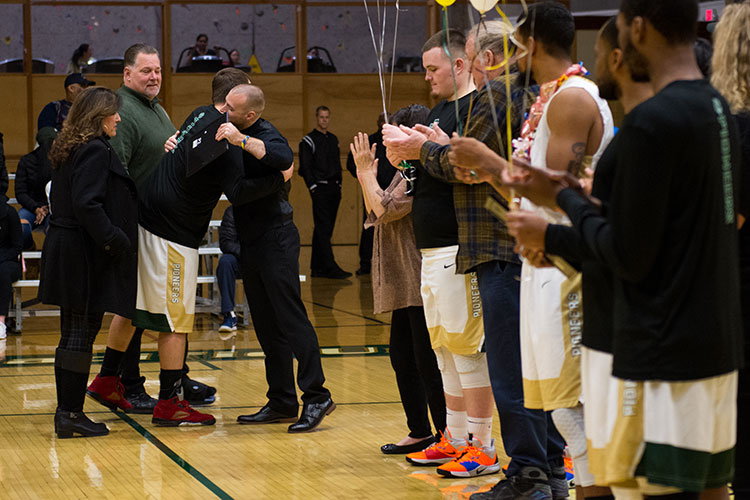 Thursday, Feb. 7, marked the PUC men’s and women’s basketball team senior night, a time when senior student athletes are recognized for their contributions to the college’s athletics program. Basketball is not the only sport to hold senior night celebrations, however; throughout the year, the men’s and women’s cross country, men’s soccer, and women’s volleyball teams all host their own ceremonies to show their appreciation for their respective student athletes.

“Senior Night was really nice,” says junior volleyball player Katie Williams. “We have four seniors this year, so all of us underclassmen made them posters and little gift bags for the night. Our coach also made sure to include a short story about each senior team member as a way of recognizing what she has done to make our team what it is. The way everyone was included and honored was a really special way of showing how much we’ll miss them after graduation.”

Other teams feature different versions of celebrations. Cross country runner and senior Nephtali Marin noted, “Instead of having a traditional senior night like other teams, the men’s cross country team usually holds a banquet instead.”

Organizing gifts and sharing a meal as a team are just a couple of the ways members show support for each other. During Thursday’s senior night celebration, students and teammates alike lit up PUC’s gymnasium with cheers and applause as names were called during pauses in the men’s and women’s games meant to publicly honor the nine seniors on the teams.

No team member is left out of the celebration, and though some shy grins suggested they would rather not be in the spotlight, each senior athlete was, for a moment, the center of attention.

PUC’s appreciation of its graduating athletes is clear, and the support for Senior Night games from both athletes and students stands as a testimony to the strength of the campus’ sense of community and encouragement.

“Each team is a little family,” Williams explained, “And Senior Night is one way we can show our graduates they will always be an important part of our team, no matter where they are.”

A full list of this year’s senior athletes is below. Congratulations to each of them for games well-played and their degrees completed. For more information about PUC’s Pioneers Athletics, including a game schedule, team rosters, and more, visit pioneersathletics.com.