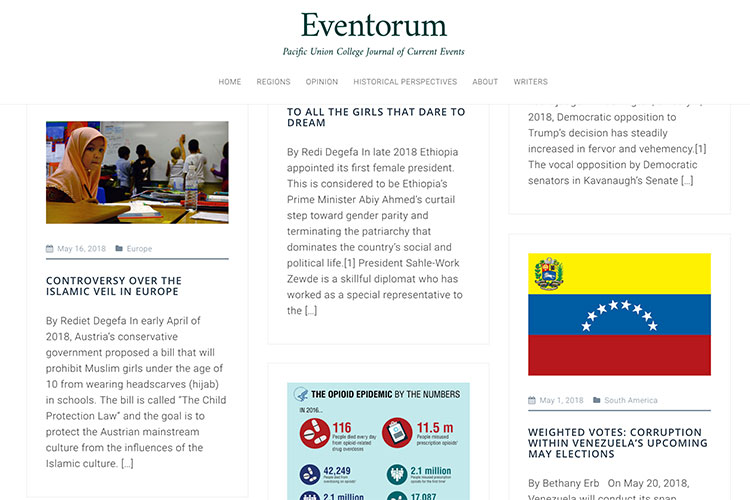 Eventorum began as the brainchild of 2015 PUC alumnus David O’Hair. Over a breakfast conversation in Greece that summer, O’Hair proposed his idea to Howard Munson, chair of the department of history, and in January 2016, Eventorum became a reality. Today, the website, designed by students in a 2016 web design class taught by design professor Milbert Mariano, is a developing current events journal, highlighting student-written articles edited and vetted by the department of history.

“Eventorum is an opportunity for PUC students to get additional academic writing experience on topics that interest them, are current with their lives, and can help better-inform our campus as a whole,” Munson explains.

Once a quarter, he meets with his students, who pitch ideas to the room. Once everyone settles on a topic, they set a deadline, and begin their research and writing process. The end goal is one article per student each quarter—source footnotes required.

“I stress the idea that our job is to draw attention to current events, with consciousness of relevant history, and to inform rather than advocate,” Munson says. “We strive to maintain objectivity and to avoid political polarization.”

Though there is no monetary motivation for getting an article published on Eventorum, Munson says students are eager to gain experience and because they care about the topics. Bethany Erb, sophomore English major and pre-med student, has written three articles for the website on topics ranging from voting corruption in Venezuela, to the U.S. opioid epidemic, to the election of Brett Kavanaugh to the U.S. Supreme Court.

“I chose my topics because of my interest in both U.S. politics and healthcare in third world countries,” Erb explains. “My decision to write about the opioid epidemic for the website was a useful catalyst to both grasp the issue and articulate its significance to my peers. I chose to write on Venezuela’s past elections because it is a key example of a modern government which has attempted to reinstate socialism, something that seems to be a lingering movement in America, as well.”

Munson says contributing to Eventorum benefits writers because it motivates them to be more aware of often under-reported topics from around the world.

“It is a great exercise in working with and evaluating sources for quality and bias,” he says.

“I have learned that to write is to articulate a chaotic jumble of thoughts, impressions, and biases into a coherent narrative,” Erb says. “Eventorum is a platform which invites rational discussion and reflective discourse in a world of Twitter-speed feedback and hyper communication. Dr. Munson’s close attention to citations and sources has taught me the value of the struggle to represent in a truthful manner.”

Munson would like to see a series of improvements on the website this year, such as an email subscription tool and a contribution option. He would also like to see Eventorum become a means for current students to connect with PUC alumni, and aspires to form an editorial committee to include the departments of visual arts, English, and communications to help manage and develop the site more effectively than Munson can handle alone, and perhaps allow for more frequent contributions by a larger pool of students.

“On the Eventorum platform, student writers should feel comfortable when they express unfavorable opinions or report on unpopular issues,” says Erb. “As a student writer, I’ve found Eventorum to be an easy way to get in the habit of having an informed opinion on relevant topics—a skill that will serve well into my future.”

To read the full collection of student-produced articles, visit eventorum.puc.edu. To find out how you can support honest journalism and thoughtful discourse by student writers, contact Munson at hmunson@puc.edu.