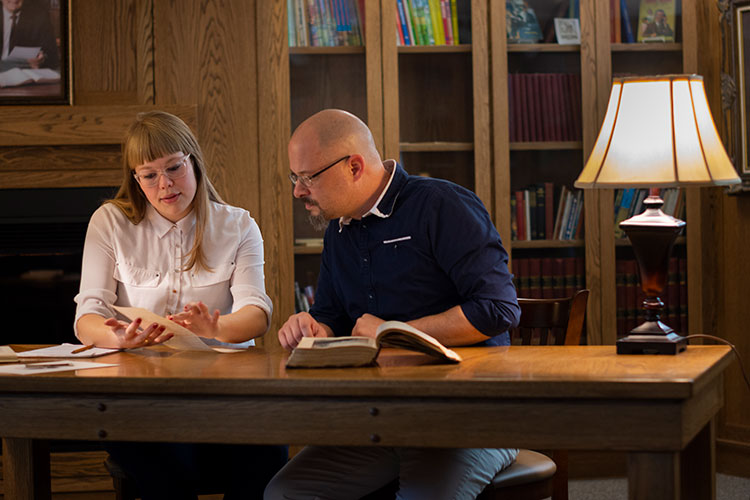 A previously undocumented letter penned by Ellen G. White, co-founder of the Seventh-day Adventist Church, has been discovered in the archives at Pacific Union College. Last week, several scholars reviewed the letter and confirmed the incomplete document was indeed in Ellen White’s handwriting.

“Judging from the scholarly stir that followed, I would say that is a significant historical find,” says Katharine Van Arsdale, PUC’s official archivist and the document’s discoverer.

Four years ago, Van Arsdale found what appeared to be a letter from Ellen G. White in a small metal cabinet designed to store maps. She noted the letter, dated May 9, 1882--one month after PUC began officially holding classes--was incomplete and lacked a signature, although someone had written in pencil the author was Mrs. White.

“I regularly took that letter with me into classes as one of several artifacts illustrating the history of PUC and the stores of its archives,” Van Arsdale says. “I would show it to the students as something ‘probably’ written by Ellen White.”

Last week, Van Arsdale presented to a class of freshmen for James Wibberding, associate professor of applied theology and biblical studies. During the class, she asked Wibberding if he happened to know, from the course of his studies, if it was actually an Ellen White letter.

“He immediately took a picture of it and sent it off via text to Michael Campbell, a friend of his at Southwestern Adventist University, who is widely read in Mrs. White’s correspondences,” Van Arsdale says. This move proved to be instrumental in authenticating the letter; Campbell, associate professor of religion at SWAU, immediately recognized the Adventist leader’s distinctive style, penmanship, and spelling.

“Within 24 hours, the newly recovered letter was being analyzed, transcribed, and even discussed in classes across the country,” reported Eric Anderson, professor emeritus of history and director of PUC’s Walter C. Utt Center for Adventist History, which is collecting significant historical materials relating to the history of the college. Scholars were quick to notice the larger context of this letter, addressed to Adventist evangelist and missionary John Orr Corliss. White was discussing criticism of her life and writings among Seventh-day Adventists, and she wrote at a time when she faced several significant challenges, including a debate about whether her “testimonies” to church members could be corrected or revised.

“Within recent years, historians have been showing significant interest in this ‘American prophet,’” Anderson says. “You don’t have to be an Adventist to be fascinated by a nineteenth-century woman who accomplished so much.” In 2014, the Smithsonian Institute named Ellen White one of the 100 Most Significant Americans of All Timein the “Religious Figures” category. She was one of only 22 women on the list.

A display featuring the newly discovered letter, among other related artifacts from the PUC archives, is available for viewing in the Maxwell Reading Room of the Nelson Memorial Library on the campus of Pacific Union College. For library hours, visit puc.edu/library. For additional information about the letter itself, contact Van Arsdale at kvanarsdale@puc.edu.

See a scan of the original document.