A Legacy of Equality: What Martin Luther King Means to PUC 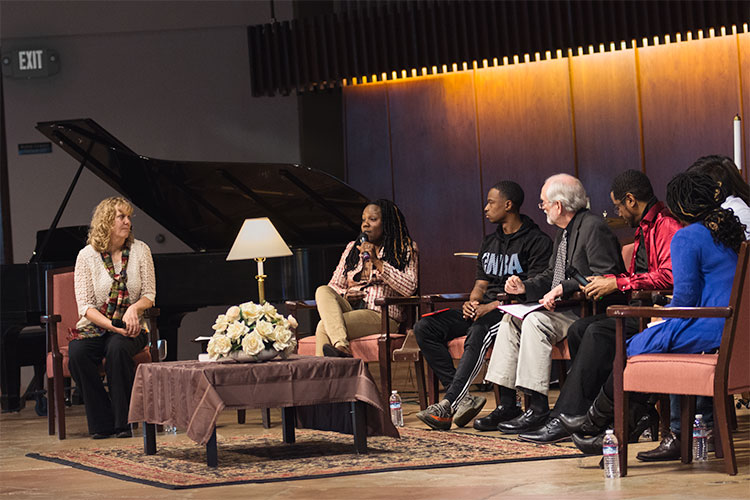 January 17, 2019, marked PUC’s annual Martin Luther King, Jr. Colloquy, a time when students and staff alike are encouraged to reflect on King’s influence on both the American conscience and in their own lives.

President Cushman opened with an apt quote by King, saying, “Darkness cannot drive out darkness; only light can do that. Hate cannot drive out hate; only love can do that.” He then went on to explain this year’s colloquy would be slightly different than previous years, in that the discussion regarding King’s legacy would be expanded to celebrate the ways in which his life and teachings have impacted all students and faculty at PUC.

The audience was treated to the college’s gospel choir’s vibrant performance of “Faithful is our God” before Tammy McGuire of the department of communication took to the stage to introduce the day’s speakers. A discussion panel of seven professors, faculty, and students were invited to join McGuire at the front and take part in explaining how King had impacted their own lives and experiences. Included in the panel was Sharon Mapes, associate vice president of finance, Joseph Scott, psychology major, Greg Schneider, professor of psychology and social work, James Cephas, professor of psychology and social work, Michelle Rai, professor of communications, Juan Hidalgo, dean of Newton Hall, and Beverly Glover, nurse practitioner and former professor of nursing at PUC.

Cephas, the first to anwer, paused before explaining, “I am his legacy. The fact that I am able to sit here with my colleagues and we are all seen as equal and the fact that I am able to look out on a diverse group of students sitting together in this church is evidence of his legacy. Some people think it was his sermons and nonviolent marches, but those were just part of the struggle he endured to ensure his legacy was one that had the power to change the world.”

Schneider agreed, “This holiday is a persistent reminder that this nation was founded on the original sin of white racism and black slavery. It is a reminder we are all called to repentance and reconciliation, and the personal meaning of his legacy to me is as a citizen of the United States, my calling is to repent for the sin of white racism into which I was born and to move forward with these things in mind.”

When asked what King meant to each member of the panel personally, Mapes spoke up first.

“I was raised in Bermuda, and there I was in the majority,” Mapes recalled. “Then in the sixth grade, I moved to Canada and was very much a minority. For me, Dr. King was powerful in his influence on my mindset. Because of him I became comfortable with accepting I am smart, I am beautiful, and I am different. But I am also equal with everyone around me. He gave me the confidence to know I can shine for God and confidently be who I am, regardless of my environment.”

Glover echoed this sense of confidence and added, “For me, Dr. King’s spirituality has made an incredible impact on my life. In his books he discusses having feelings of rage, guilt, and anxiety, and how his prayer life gave him the ability to respond in a Christian way. God gave him the power to be who he was, and that has resonated with me deeply.”

McGuire paused before asking the final questions, and she asked students to contemplate their own answers before addressing the panel one last time.

“Why, if at all, is Dr. King’s message still relevant, and what would it be if he were here today?” she asked. “And how can we honor his legacy moving forward?”

Hidalgo was the first to answer: “His message is relevant today because at its core it is the peaceful pursuit of human dignity through the eradication of dogmatic ignorance.” He went on to explain on a recent trip to South Africa he was confronted with racism on a scale he had never previously experienced. As a result, he felt regardless of whether we see racism on a daily basis, we must remain committed to awareness and continue to move forward in creating a world where it no longer exists.

Scott weighed in as well, saying, “We can honor Dr. King by recognizing the past and changing how we act today. There is a lot of madness in the world right now and our first step should be to start treating each other as one. Ending the separation in our country and standing together as a group is the best way to fight the injustice around us.”

As the discussion came to a close, McGuire motioned towards the audience and asked students to take a minute to contemplate the questions asked and share their thoughts with the person sitting beside them. After the brief discussion period, she encouraged students to write down the most impactful statement of the day on a slip of paper to be displayed in the Dining Commons later this week.

“We want to hear your voices, and we want to know how Dr. King’s influence has inspired the PUC family,” McGuire explained.

A benediction was then given by Alexandra Smith, executive assistant for Academic Administration. As she gave thanks for Dr. King and his lasting and positive impact on all American lives, students were encouraged to move forward with a renewed sense of unity and mutual purpose best summed up by Dr. King himself: “Hate is not the way. Bitterness is not the way. We must stand up with love in our hearts, with a lack of bitterness and yet a determination to protest courageously for justice and freedom in this land.”