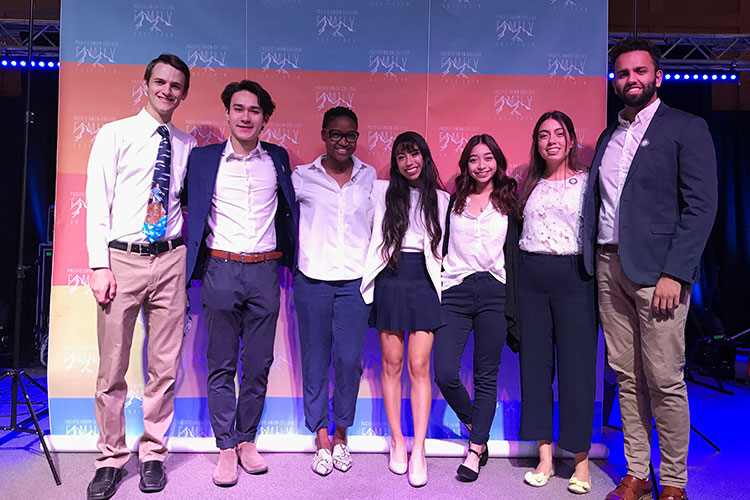 “This was a hard year,” said 2017-18 student association president Megan Weems to a packed Dauphinee Chapel. “It was already a transition year with new administration, and then a few weeks into the school year, the valley caught on fire.”

Weems was addressing the Pacific Union College student body at the final Colloquy event of the year, focused on the year’s theme, “Family.”

“Change takes a while,” she continued. “PUC has a lot of things to improve on, as we all know, but things are going up from here. We’ve laid the foundation and we’re making headway toward something better.”

Weems thanked her 2017-18 student association team for loving the campus and demonstrating how a family should behave.

“I saw it in their hearts, in the way they interacted with people,” she said. “They just love. And that’s what PUC needed. I was incredibly blessed, and I hope and pray that in something someone did or said at some point this year made you feel a little bit of that heart.”

“The SA is you guys, too,” Weems added. “It’s not just the eight or nine people elected; you’re all part of the Student Association. Thank you for this year.”

Kenzie Hardy, incoming SA president, addressed the room by thanking everyone who participated in the SA election and placed their trust in the incoming team.

“Like Megan and her team have said all year, we are a family,” Hardy said. “We’re kinda dysfunctional, pretty large, and very diverse, but a family nonetheless,” she added with a grin. “I hope everyone here will discover, if you haven’t already, that this place is your home.”

Hardy also encouraged everyone who would be here in coming years to welcome newcomers so they, too, feel at home.

“We have two goals for the coming year,” Hardy announced. “First, to strive for continuous improvement; and second, to embrace and accept each other, and continue to push for diversity to be honored and celebrated.”

With that, Hardy introduced her team, the Student Association officers for the 2018-19 school year:

Weems joined Hardy on-stage after this, and together they invited the outgoing and incoming officers to the platform, where Weems’ team passed the torch by honoring Hardy’s team with SA officer pins.

“It’s hard to represent so many people,” Weems admitted, “but we pray and hope that we’re doing it in a way that suits everyone best and makes everyone feel like they belong.”

Following the event’s theme of gratitude, Alma Musvosvi, 2018-19 SA executive VP, began addressing the concept of “family.” Acknowledging that not everyone comes from a happy family “full of love and smiles,” Musvosvi pointed out that the word “family” doesn’t necessarily conjure up a place for everyone to which they wish to return.

“When we chose this as our theme this year, we wanted to reshape what anyone’s idea of ‘family’ is,” she said. “Whether it’s a bad or wonderful place you come from, family is more than the people you’re born to, or your siblings or your grandparents. It’s greater than that. It’s also the people you form into your community called PUC. We didn’t end up in the same family by birth, but we ended up in the same family here. Let’s continue that legacy.”

As an end-of-the-year celebration, the SA officers had arranged for free donuts, lawn games, and a photo booth outside of Winning Hall, and ended Colloquy early so students would have time to enjoy the activities before their 11 o’clock classes.

“This is two years of leaders,” Weems concluded, gesturing to the two groups of officers at the front of the room. “Two years of going from the old PUC way to a new, better, and brighter future for PUC. I’m excited to see what this new team does, because they have a great amount of heart, and any good thing comes from having a lot of heart, love, compassion, and hard work.”

To close the final Colloquy of the year, Daniel Grigore, Campus Chronicle editor for the 2017-18 school year, offered a prayer.