The Fierce Urgency of Now 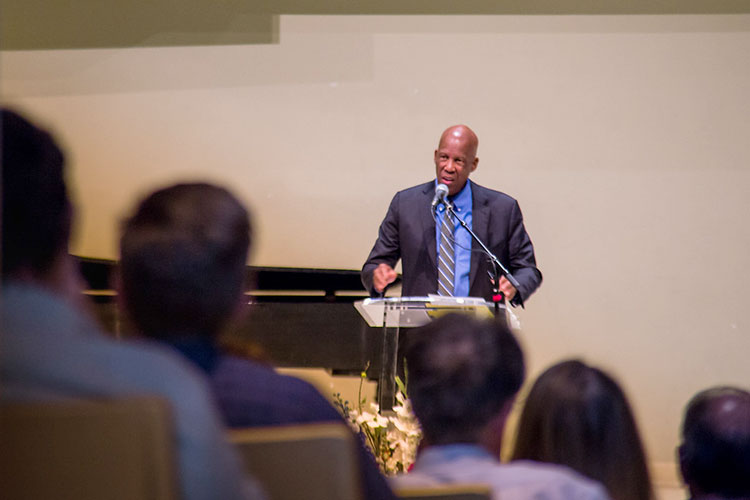 “The hottest places in hell are reserved for those who, in times of moral crisis, remain silent.”

The Little Rock Nine was a group of nine courageous teenagers who, in 1957, were the first black students to attend classes at previously all-white Little Rock Central High School in Arkansas. This move involved armed guards, first to keep the students out by order of the governor, then to escort them safely inside by order of President Eisenhower. Their courage and the courage of their parents left a legacy of determination and standing for what’s right.

Last week, Roberts spoke in the PUC Church on “The Fierce Urgency of Now.”

“There is a compelling need to know and speak the truth as early as possible,” Roberts said. “Day after day, when we say nothing, we maintain the status quo.”

Roberts stated that racism exists at bone marrow level in this country, and that it’s so embedded in the culture that some people believe the ‘truth’ of it. He urged attendees to begin and continue addressing the issues, making it clear that ‘progress’ is not yet the order of the day.

“Our first action plan is high-level self-awareness,” he said. “Know who you are, and what you’ll do in the face of whatever comes at you.”

He also expressed the importance of maintaining hope, always. At a recent speaking engagement, Roberts sat in a church pew and thumbed through a hymnal. He came across one called “In Times Like These” and began asking himself what it is that we need in times like these. As he continued flipping the pages of the songbook, he found another, called “I Know Who Holds Tomorrow” and found himself smiling, because he knew that whatever ‘times like these’ we face, he knows who holds them all.

“The time is now to confront any and all injustice,” Roberts said, as he concluded his presentation. “Micah 6:8 is what it’s all about—do justice, love mercy, and walk humbly with God. You can’t just walk in the woods here around campus; you must walk with people who will see you and ask questions. Who will see the peace you have and ask where it comes from. Who will start a relationship with you. Realize that fierce urgency. Make it possible for me to not stand here, giving this kind of talk.”

The following Saturday, Feb. 3, Roberts presented the 2018 lecture of the Percy and John Christian Civil Rights Conference Center at PUC. His presentation was titled, “Keeping Watch, Heeding the Call, Speaking Up.” In his introduction of the speaker, Dr. Eric Anderson, chair of the department of history, read the dedication from Roberts’ book, “Lessons from Little Rock,” dedicated to Roberts’ grandsons: “Boys, the world is not yet reshaped in the way I would have it for you, but many of the obstacles that I faced are no longer apparent. May the God of this universe guide your navigation through this uncertain terrain.”

Martin Luther King, Jr., once stated that some Americans believe racism is a rare occurrence by a few bigoted men. Roberts, like King, refutes that idea.

“Racism is a faith,” Roberts said in his Feb. 3 lecture. “It is a religion, an ideology, and a belief. And it is deeply embedded in this country’s marrow.”

Roberts addressed the high arrest rate of young black men in the United States. He shared the fact that for many years, the abbreviation “NHI” was used in police reports of calls to scenes of violence involving those he termed “black or brown people.” NHI stands for No Humans Involved.

He also mentioned the wage and wealth gap between white and black Americans and its link to unfair employment and labor practices, as well as budget allocations between various school districts—those in white-majority suburbs versus those in the black-majority inner-city.

“We want our country to exemplify the best possible narrative,” Roberts said in closing. “By keeping watch, heeding the call, and speaking up, we can help avoid historical repetitions. We can know that when we see X, Y is not far behind.”

A Q&A followed the lecture, and when asked how someone should approach those in their circle who don’t want to listen, Roberts responded, “Your task is to learn—that’s part of keeping watch. Voices will urge you to do the right thing, whenever and whatever that might be. So speak your truth, and then, when your truth changes—which it will, as you continue to learn—speak your new truth. There is no guarantee you will succeed, but you will have the satisfaction of knowing you gave your all.”