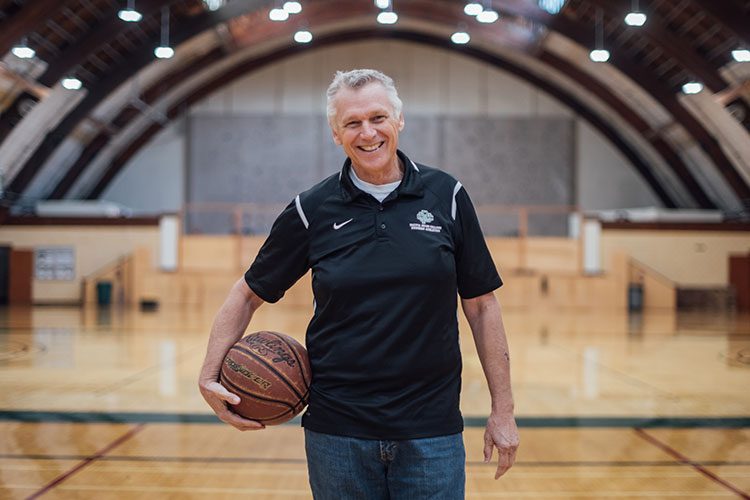 It’s impossible not to smile at Ralph Perrin, new athletics director at Pacific Union College. It doesn’t matter if you’re only just meeting him or have known him for decades, the grey-haired gentleman’s face lights up as soon as he sees you. His office, hidden between exit doors at the side of the basketball courts in the PUC gym, boasts awards given not to Perrin himself, but to his daughters.

The lack of presence of awards with his name speaks not to his ability, but rather to his focus and his humility. Perrin played varsity basketball in high school, while also enjoying on the side racquetball and football.

“I played it all,” he says with a laugh. “The bouncing ball is like a siren call to me. If I hear of a sport going on, it draws all my attention.”

Perrin says he finds joy in virtually all sports, but some of his favorites include volleyball, baseball, snow sports, and water sports, and he raised his kids playing them as well.

Despite—or perhaps as a result of—his interest in athleticism and sports, Perrin found himself more interested in the biochemical part of nutrition. This led to his undergraduate degrees in biology and chemistry, his master’s degrees in nutrition, biochemistry, and health education, and his doctorate in preventive care. He did clinical work for a few short months, then moved into a professorship.

“I’ve been in academics all of my career,” says Perrin. “That’s what I love.”

It doesn’t take much to recognize that love; Perrin taught health sciences and physical education before entering the administrative realm, and even went to Rwanda to help start a medical school. Over the past 25 years, he’s been dean of students, academic dean, and vice president for student development, as well as athletics director.

His deep-seated experience in academia, combined with his profound love for all things active make for a well-rounded and passionate athletics director, which is exactly what a college athletics department needs. Especially one at a Christian liberal arts college like PUC, where holistic living is not only encouraged, but taught.

“What I’m interested in professionally in academics is development of the whole person,” Perrin says. “I’m interested in every dimension of our students’ personhood, and have identified six dimensions of this, which I developed into the acronym PRAISE: Physical, Relational, Affective, Intellectual, Spiritual, and Environmental. And the word PRAISE reminds us to give praise to God consistently and constantly, in everything we do.”

Perrin incorporates PRAISE into his athletics directing in many ways. For example, the “I,” which stands for Intellectual. He points out obviously, athletes need to improve in their skills, but just as important are their attitudes and behaviors.

“I’ve asked employers at other institutions how our graduates are doing, and almost to a person, their response was they know their craft but they don’t know how to deal with people,” he says. “They don’t have communication skills. So that’s where the attitudes and behaviors go hand-in-hand with the knowledge and skills.”

When Perrin first got into the athletics education business, intramurals were considered “extracurricular.” Perrin worked hard to change that to “co-curricular,” noting involvement in sports activities should be considered an integral part of the academic experience, rather than a side note of convenience.

“You don’t have to be an athlete to be interested in physical activity,” he adds. “Not everybody gets into chamber choir, but everyone has a musical component to who they are. Not everyone gets to participate in College Bowl, but academics and intellectual growth is part of each of us. The same can be said of physical activity such as sports.”

In his classes, Perrin requires his students to complete a health behavior change project. He acknowledges there are many who think they don’t have time to exercise because they have to study, but says that is flawed thinking.

“I tell my students if they had a regular exercise program, they would find they would be able to learn more in a shorter amount of time because of the exercise program than they could without one,” he says. Then he adds, “I never had one student come back and say it didn’t work.”

Perrin firmly believes “achievement” in his profession doesn’t mean walking into a classroom and spouting words of wisdom. It is, rather, to help every individual student be successful.

“The mark of a good teacher is being able to open the doors of understanding for someone who may not otherwise without your help really grasp a concept,” Perrin says. “That takes a lot of effort and work, and due to the varied needs in each classroom, we’re forced to think beyond teaching how we were taught. The bottom line for me is to help make our campus a safer place, a better place, for our students to come, grow, learn, and be successful.”

Perrin carries this concept into his athletics director role, as well, making sure each of his athletes gets the teaching and training they need, as well as encouraging whole-person health. This includes the social aspect.

“I really enjoy connecting with students outside of the classroom, off the court and field,” he says with feeling. He’s taken students water skiing and had them over to his house. “Inviting students into my home and engaging with them socially was probably the start for me of realizing how important the whole person is.”

Perrin passionately expounds upon his belief that athletics are an integral part of campus life, even for those who are not gifted in physical coordination.

“It’s not just people running up and down a field or court playing ball,” he says, punctuating his statement by tapping his desk with his hand. “Physical activity, especially that which also brings about community in the form of a team sport, is essential to the development of the whole person, and if it’s done well, it permeates campus.”

He adds PUC’s administration have been very supportive of both his role and the athletics program, and he is confident and optimistic for the program’s future. He envisions the college as a train, with academics as the engine and student life—including athletics—as the fuel helps the engine run.

For information about PUC’s athletics program, including a list of teams and game schedules, visit pioneersathletics.com.

A Statement from President Cushman