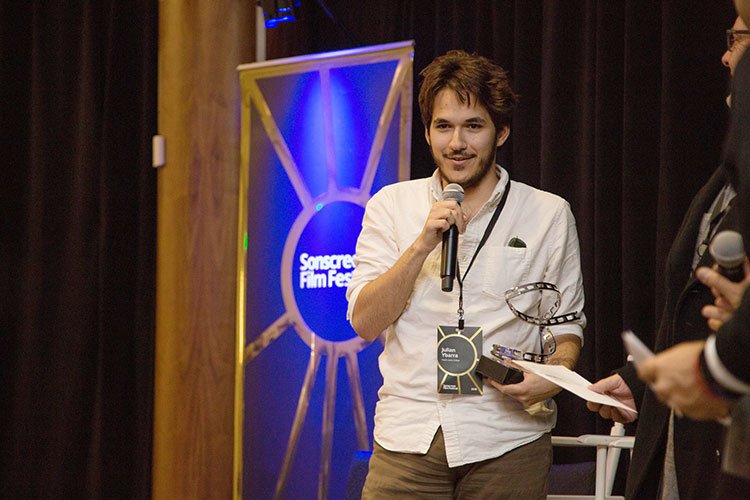 "When I was a little boy, I saw 'Star Wars Episode I: The Phantom Menace' and it blew my mind. Ever since then, I have wanted to make movies."

Julian Ybarra, senior film and tv production major from Houston, admits there is some humor to that statement, because he doesn't even like that movie anymore.

"It's completely unrepresentative of what I want to do," he says. "I want to direct and make movies, but not blockbusters. I want to create literary movies."

Ybarra has already started making this dream a reality, focusing on film in his major of choice. At the beginning of April, Pacific Union College had six student films nominated for awards and showing at SONscreen, an annual film festival created and sponsored by the North American Division of Seventh-day Adventists (NAD). One of these films was Ybarra's experimental film, "Genesis."

"My film is a meta narrative for one thing," Ybarra explains. "It's a story wherein the characters aren't representative of themselves, but of characters in a badly written story."  Ybarra actually appears in his own film as the director.

"For another thing, I don't shoot in video," he says. "The film is all stills for the most part until the very end. Rather than being 24 photos a second like most films, it's just one photo for multiple seconds at a time. I think the stills give it an interesting relation to time."

This is the first year SONscreen has included an "art/experimental short" category among the more traditional categories of dramatic, documentary, comedy, and animated shorts. Although "Genesis" was nominated in the art/experimental short category, it was selected for the Jury Selection Award.

"In movies there's always a lot of coincidences that help the protagonists," Ybarra says of the inspiration behind his award-winning film. "I wanted a protagonist who was aware of these coincidences and realizes he might be part of a world that isn't real."

A French film done in a similar style to Ybarra's, called a photo novel, gave him the idea.  "I wanted to tell a story that I liked," he stresses. "In some ways I was also trying to talk about the relationship writers and directors have to the characters and whether or not that relationship is honest. It could also be a bit of a statement about the way women are portrayed not just in cinema but in narrative in general."

Ybarra has no specific plans for "Genesis," though several jurors at SONscreen encouraged him to enter it into other festivals.

During SONscreen, Rajeev Sigamoney, associate professor of film and television production at PUC, participated in a panel discussion which also included Paul Kim, chair of the department of visual art, communication & design at Andrews University, and Dan Jackson, president of the NAD, among others. The topic of the panel was "The Role of Film in Addressing Social Issues Challenging Society and the Church."

"I'd met everyone on the panel before, and even though we didn't agree on everything, it was an intellectual conversation about meaningful things," says Sigamoney. "I was challenged on points and challenged others, too. It was good for our students to see professionals and 'adults' in the church respectfully discussing issues that are important to them as young people and filmmakers."

The trip to SONscreen, which took place in Maryland this year, was a bonding experience for the students who participated.

"We're a super diverse school, so we don't all agree," Sigamoney says. "We've all reached the same resolve of how art relates to spirituality from different places. Our brand is kind of all the same and we truly do believe what we're saying with these films. It was beautiful to see our students come together over something they all love and respect."

Ybarra plans to eventually move to Los Angeles and pursue a career writing and directing independent (colloquially called "indie") films. When others learn of his career plans, he is often met with anxiety and questions, mostly focused on how he will maintain his faith surrounded by all the perceived "worldliness" that is Hollywood.

"Justice and morality are very important to me," Ybarra says with conviction. "I think daily about my relationship with Christ and how that applies to my career path. Most films, even mainstream ones, at least touch on, if not directly address, ethics, morality, and other important values. I want to send these messages in a different way, using what I'm good at and doing what I love. I won't abandon my faith in the process; I will rely on it."

To learn more about the film program at PUC, visit puc.edu/admissions or call (800) 862-7080, option 2 to speak with an enrollment counselor. For more photos from SONscreen, check out the NAD's Flickr album at flickr.com/photos/nadadventist.