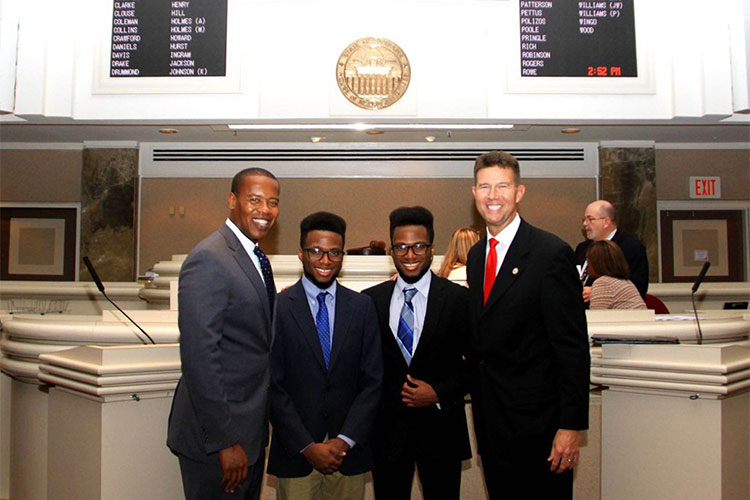 As history and political studies majors at Pacific Union College, brothers and Maxwell Scholar finalists Mark and Michael Cebert were required to complete an internship as their capstone project as part of their degree. To this end, they worked together for state representative Anthony Daniels (D) in their home state of Alabama. Despite the project only requiring one month of interning, the Ceberts ended up working for three, since they were well-liked and tackled some large projects.

In February 2017, Daniels made history when he became the first black person and, at 34, the youngest individual ever to hold his legislative position. Mark and Michael’s interactions with him, however, began several months earlier, in the summer of 2016.

“We expected the typical intern stuff; you know—getting coffee, making copies, carrying stacks of files,” Mark admits. “It wasn’t that way at all.”

The brothers spent their first few weeks building a donor database for the Democratic party in the state. Despite its advanced age, the Alabama democratic party has historically never tracked who their biggest and longest-term supporters were.

“Most parties have a record of who has donated in the past 20 years,” explains Michael. “This allows them to determine who they need to stay in touch with, who they should have lunch with, and who they should call when looking for campaign support. No such thing existed for the Democratic party in Alabama.”

At least, not when Mark and Michael arrived. Daniels’ long-term goal was to increase voting by 20 percent among minorities in Alabama. The Cebert brothers were to be a large part of working toward that goal, which meant compiling donor data from scratch. And they did it from a small room in the back of a dental office.

“Being a state representative in our area of Alabama is a part-time gig,” says Mark. “When he’s not serving our country, Daniels helps his wife run her dental practice in Huntsville. So, every day we went to work for a legislator in a dentist office.”

Day after day, hour after hour, Mark and Michael combed through Federal Election Commission (FEC) records, conducted online research, and talked with city counselors. The democratic party had received over 60,000 donations by 10,000 individuals in the last 20 years, and the Ceberts were tasked with making sense of all of it.

“I am not a statistician or a data analyst,” Michael says with a grimace. “But we managed to do it in two weeks.”

The result was the first donor database for the Democratic party of Alabama, listing names, how much was donated to which campaign and when—a document that will now be fastidiously maintained and monitored.

With two weeks of intense research and data compilation under their belts, Mark and Michael tackled their next project: Policy development.

“At that time, healthcare was still on the table,” Mark recalls. “We were asked to prepare for Daniels a proposal pertaining to healthcare, so we researched what other states had done. In the end, we were able to say that X was the best plan to use, based on information and statistics from other states and areas with similar demographics. We were able to tell Daniels that if we used Plan X, we could insure Y number of people and raise Z many more dollars. This project gave us a better understanding of U.S. policy development.”

This is where their PUC experience came in handy.

“All the writing we did in our history and political studies classes really paid off,” says Michael. “It was some of the best preparation we could have had for this kind of a project.”

The brothers also attended a prison reform summit in Birmingham with the objective of gathering statistics in order to put together a plan of prison reform on behalf of Representative Daniels. This is a hot topic in Alabama, since the state, along with 12 others, has a higher incarceration rate than any country in the world, and is third in the U.S. in incarcerations per capita.

“I put a plan together based on my findings, but these things get tabled all the time because it’s politics and there’s always something more important to talk about after you’ve done all the work,” Michael says.

A second database Daniels asked the brothers to develop was one of businesses and churches in key positions for reaching potential minority voters, especially in black communities. This required Mark and Michael to identify minority-run businesses, African-American and Latinx churches, and newspapers and radio stations managed by minorities.

“In most places, the Chamber of Commerce would have this information,” Michael notes. “But in Alabama, this is not the case. There was nowhere to look for contact information for these communities, so we were left to searching the Yellow Pages, hunting down information online, and making phone calls.”

Many media outlets don’t advertise who runs them, so beyond small local stores, there is almost no way of knowing who runs what. Mark and Michael put together a list of hundreds of businesses and churches, something to which the Democratic party in Alabama has never before had access.

“The whole purpose was so any future politician can call up, say, minority-run barbershops in their district and ask them to vote, and ask them to encourage their customers to vote,” Mark explains, “This allows political leaders to become a little more connected with their communities. It taught us a lot about how to build networks, even when information is less than easily obtained.”

Mark and Michael also attended a special legislative session in the state capitol, and were granted page passes to access the floor, meaning everyone thought they were there to run errands when needed.

“This is when we did those coffee runs we expected in the beginning,” laughs Michael. “It was okay, though, because we got to interact with other representatives, too, and really got a feel for what it was like in a session of legislature. There is a surprising spirit of bipartisanship, despite the unruly history involving physical altercations on the floor.”

Additionally, Mark and Michael began work on a coalition website where Alabama democrats can unify on big issues such as immigration for Hispanic groups, prison reforms for black groups, and more.

Their positions as representative interns allowed the Ceberts to sit down with many politicians on both sides of the aisle.

“I felt like some of them were as familiar as my own family,” Mark says, “even some across the aisle, whom we were directly working against at times. You’d be surprised how interested they are in non-political things. When they’re not working, they’re just like any of the rest of us, talking about sports and their kids and other regular things. That was both surprising and refreshing to me.”

Despite the busyness and the stress of their internship, Mark and Michael agree it was overall a great experience, giving them each a better idea of what they want for their future careers.

“It was eye-opening to see tactics, methods and ideas I hadn’t considered before,” says Mark. “I want to be able to take communities people assume have agendas that are at odds, and be able to synthesize them. We can be stronger that way.”

Michael’s experience helped him decide that he wants to be directly involved with and understand the people he serves.

“I want to help people, and that’s why I want to work for non-profits before I dive into politics,” he says. “I think it’s easier to lose sight of your purpose in politics. There are a lot of side favors, a lot of steps, and a lot of charming people and keeping them happy, and it’s easy to lose your direction. If you don’t have a strong character, you can forget what you’re fighting for. I don’t want to ever lose sight of that.”

For information about the history, political studies, and ethics program at PUC, visit puc.edu/admissions or call (800) 862-7080, option 2.