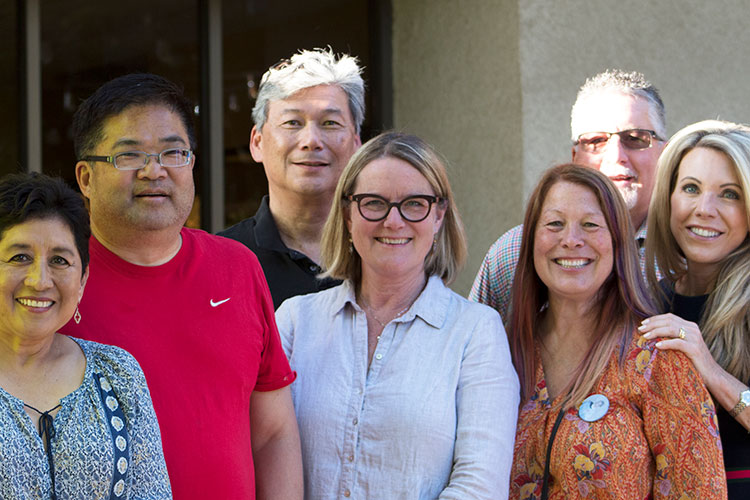 Ask anyone, and you’ll get variations on a theme, but it’s impossible to relive the history of Pacific Union College without including Rita Hoshino, ’79, in a significant way.

This is why, on Saturday, April 21, during Homecoming Weekend, approximately 100 of Rita’s friends and family gathered in the Campus Center to honor, remember, and celebrate Rita. Ice cream and strawberries were served, and members of the Hawai’ian Club performed two hula numbers by the fountain in front of Paulin Hall to close the event.

It was during this event Kellie Lind, chief advancement officer, officially announced the Campus Center will be renamed the Hoshino Center, in honor of Rita, who dedicated her life to mentoring and supporting students.

“This event was a beautiful celebration honoring Rita’s contributions to PUC, and a chance for her friends and family to remember her with stories of the past and plans for the future,” says Lind. “Current college administration is committed to permanently recognizing Rita’s contribution to campus life at PUC for more than 25 years. We want to continue her legacy.”

Rita graduated in 1979 with a bachelor of science degree in art and began working at the college immediately. She served students as a professional mentor and advisor, coaching them through leadership, conflict, budget management, and failed plans, among other things.

“The Student Association officers chose ‘family’ as this school year’s theme,” said Doug Wilson, PUC’s director of student engagement and leadership, addressing the crowd at Saturday’s event. “This is very appropriate, because Rita made everyone feel like family, and I know all of you thought of her that way.”

It was a well-known fact Rita knew everything and everyone; so well-known, in fact, her nickname was Rita Rolodex. Her knowledge crossed generations, as well; she worked at PUC for so long eventually she was mentoring students who were the children of her college classmates.

When she died in February 2014, her loss was felt deeply not just by those on campus, but any who had walked the sidewalks and halls of PUC during the mid-70s and following.

Present at the Homecoming Weekend gathering was Dennis Hoshino, Rita’s brother, along with his daughter, LJ, grandson, KJ, and Lorna Wong, Dennis’ ex-wife and a life-long friend whose father grew up with Dennis and Rita’s father in Hawai’i.

“I came to PUC from a lifetime of attending public school and knew only three people here,” she said. “I joined Rita’s Choices group, a program where faculty and staff welcomed students to their homes in small groups. We sang, we told stories, and we bonded. She taught me how to alphabetize my CDs. She was wonderful in so many ways and made me feel part of a family here. I hope we can continue that.”

Poh-Matacio also placed a lei in the water of the fountain outside Paulin Hall during the hula dancing, in memory of Rita.

Also in honor of Rita, PUC has begun developing plans for a million-dollar project to honor her contribution to the college.

“This is the center of campus,” said Lind during the event. “It’s an important building. We want to put together a scholarship to train students for their professions after they leave, but also so they can excel as leaders while they're here.”

Beyond renaming the Campus Center, the Student Association offices will be redesigned, and a scholarship in Rita’s name will be established for student leaders to receive professional leadership training as part of their work as student officers.

“This place is so important to the future of PUC,” said Dr. Bob Cushman, college president, to the gathered group. “When the consultants for our strategic plan came on campus, they noted that the Campus Center sits at the intersection of the two main traffic corridors on campus. It is strategically situated for students to take advantage of what we offer here, and we want to make it even more useful.”

Jennifer Tyner, vice president for student life, enrollment, and marketing, spoke about Rita’s contributions to the Adventist Student Personnel Association, a professional organization focused on student development. She also shared insight on Rita’s commitment to loving and supporting each student for who they are.

“Rita was really a pioneer in student development and student life,” said Tyner during the event. “She loved her students more than anything, and we’ve really tried to keep that vision in our plans for the Campus Center. We have a lot of work to do, but we want every student to feel connected, and to leave knowing they have a place to come back to, knowing God, and knowing themselves.”

Ramsey Mesnard, a senior in high school who grew up neighbors with Rita and called her “Auntie Rita,” flew in from Lincoln, Nebraska, specifically to attend the event. He performed My Place in This World, a song by Christian artist Michael W. Smith, which was included on a mix CD Rita made for Mesnard when he was 13.

“That’s what Rita did,” said Michelle Velazquez Mesnard, Ramsey’s mother, introducing the song. “She helped us find our place in this world, and she was so good at it.”

Megan Weems, current Student Association president and graduating senior, shared thoughts from her perspective on having a leadership legend such as Rita to look up to.

“I did not know Rita Hoshino,” she began, “but from what I heard, she is what a leader is made of. She left a legacy and a mark on the people she knew and this campus. For someone like me who is 23 and an aspiring leader, hearing about a woman who goes above and beyond to care and nurture others to be the best they can be is inspiring. It is inspiring for all of us, and a reminder that what we say and what we do and even more importantly, how we make people feel will leave the most lasting mark.”

Provided during the event were Rolodex cards for guests to use to donate toward the fund to rename and remodel the Campus Center and develop a leadership training program for student leaders in Rita’s honor.

“It’s thrilling to be able to show our thanks and respect to Rita by naming the building she spent a large part of her life in for her,” says Lind. “She touched so many lives and we want that legacy to have a physical monument here, on the campus she loved so much, surrounded by and filled with the students for whom she cared so much.”

To contribute toward the Campus Center for student leaders, contact the Alumni & Advancement office at (707) 965-7500 or alumni@puc.edu. To donate online, visit give.puc.edu.

Mentorship and Kite-making: Making a Difference for Teens