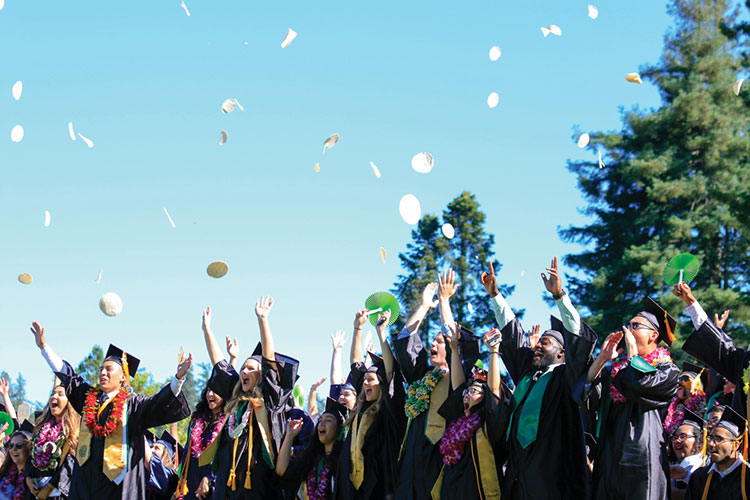 To the sound of enthusiastic cheers of thousands in attendance, for the 115th time on its campus, Pacific Union College celebrated its annual commencement exercises on Sunday, June 18, with 392 students graduating.

For the first time, the ceremony was held at Maxwell Commons, located in the heart of the college’s campus between the PUC Church and Paulin Hall. The new commencement site was named in memory of Dr. Malcolm Maxwell, the 19th president of PUC. He was the first PUC alumnus to serve as president, and he had the longest tenure—18 years—of any president of the college. Maxwell passed away in 2007, but his legacy and the impact he had on PUC continues to live on. He is remembered for his energy, passion, and commitment to higher education, and it is in this spirit Maxwell Commons was named.

The commencement service began bright and early Sunday morning, as friends and family members scrambled to save the best seats in the shade for the weekend’s final event. While the processional music began, graduates marched down the two center aisles, bedecked in their regalia and mortarboard caps, many wearing floral leis, honor cords, medallions, and stoles.

Tony Anobile, vice president of the Pacific Union Conference of Seventh-day Adventists and member of the PUC Board of Trustees, started the service with the invocation and welcomed over 3,000 guests in attendance. He also awarded an honorary doctorate to Dr. Eric Anderson, the college’s outgoing president, in recognition of his exemplary leadership over the past few months. Dr. Anderson has served as the college’s president since January after Dr. Heather Knight stepped down.

Sergeant Major Juan Hidalgo Jr. gave the commencement address. Now retired, Hidalgo served in the United States Marine Corps for 31 years, and his son, Juan Hidalgo 3rd, is the senior class president, making the service a very special Father’s Day occasion for their family. He urged the graduates to go after big dreams, and do what God put them on the earth to do. “As you dream big, you’re going to have to stay close to Jesus. You’re going to need to stay close to Jesus because He is the only way that any and all of our big dreams come true,” Hidalgo Jr. said. He recommended the seniors take the word “can’t” out of their vocabulary, and not to allow setbacks to stop them from moving forward. In closing, he said, “With Jesus, hard work, and determination, you can and will have a wonderful life full of success, so don’t be afraid to dream big!”

Senior class president Juan Hidalgo 3rd gave the valedictory speech, where he reminisced about various buildings on campus and the memories he made within each of them. He said that in five, 10, or even 20 years when he returns as an alumnus, while he may not recall the names of each place, he will always remember the teachers, friends, and memories he made at PUC. “Live life. Do good. Be worthy of the sacrifices that have been laid down so that you could be here today on this stage,” Hidalgo 3rd imparted.

Katherine Kaatz and Justine Sauza, senior class executive vice president and social vice president, respectively, presented the class gift, a plaque that will be placed at the special memorial the class of 2016 gave in memory of students who have passed away while at PUC. Additionally, the class helped raised more than $25,000 to create an endowed scholarship in honor of Kevin Canavan, a senior business major who passed away last July. During the service, Dr. Anderson presented an honorary degree to Canavan’s parents.

With the assistance of Dr. Anderson, academic dean Dr. Nancy Lecourt conferred degrees upon the graduates. Newly awarded professor emerita of speech pathology and PUC alumna Jennifer Wareham Best warmly welcomed the graduating class to the college’s alumni family, reminding them, “As you prepare to leave this beautiful hill and go into all the world, I want to assure you you are not going alone: you are going to join a PUC family 26,000 strong.” Dr. Robert Cushman, PUC president elect, was also present for the ceremony and was given a special “master key” to the college in preparation of his takeover before closing the service with the benediction. Cushman officially begins his presidential duties July 1.

Following the service, the class of 2017 celebrated their years of hard work by throwing tortillas and confetti, as is PUC tradition. Together, the graduates left Maxwell Commons to meet friends and family in the campus mall to receive their congratulations for this monumental life achievement.