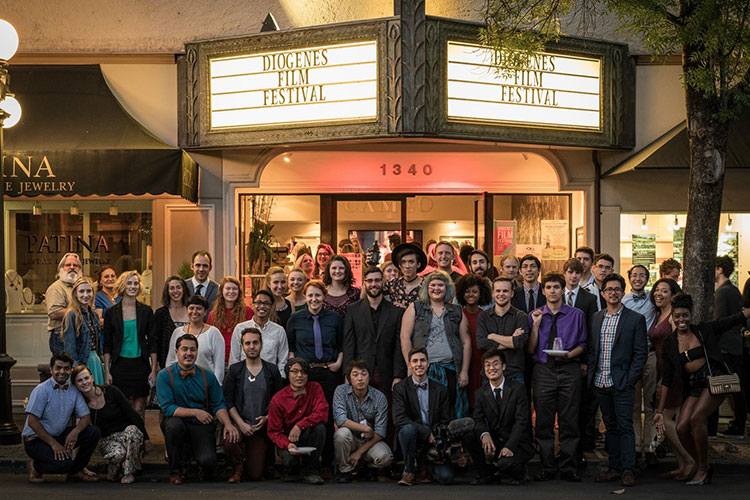 On May 26, Pacific Union College hosted the 14thDiogenes Film Festival at the Cameo Cinema in St. Helena. The annual event showcases the talents of both PUC’s visual art majors. This year, 25 short films were shown and five awards were available—Filmmaker of the Future, Orson’s Disciple, Audience Choice Award, Audience Choice Award (for Thesis Films), and Best Thesis Film—with underclassmen being eligible for the first three.

The Audience Choice Award was awarded to the producer receiving the most votes from a text poll. However, Best Thesis Film and Filmmaker of the Future were determined by festival judges.

The underclassmen projects ranged from a TV web series, “At Grainger” by Hayden Cox, to short films such as “The Wiggles” by Kaitlin Darnell and Alexyss Johnson. A short question and answer session and awards presentation followed.

This year the Filmmaker of the Future and the Audience Choice Award were both awarded to Taylor Bivens and Nick DeChicchis for “White Collar.” Also nominated were Jonathan Salvador for “Investigative Journalism,” Julian Ybarra for “Genesis,” and Rachel Ermshar for “Teardrop.”

Johnathan Thall, sophomore software development and film and television major, received The Orson’s Disciple award, a new honor given to the film student who has gone above and beyond in assisting others with their films and helping other projects become successful.

Four senior theses were presented: “The Paper Caper,” a cardboard animation film by Austin Siagian; “Shouldn’t Have Tried,” a dramatic feature by Nick Sinn; “Pigeons,” the highly anticipated film by AJ Scarpino; and “The Follow Through,” a full-length 25-minute feature by Grace Romstad. Following the thesis presentations, senior filmmakers participated in a Q&A session.

Grace Romstad, senior film and television major, received both the Audience Choice Award and the Best Thesis Film for her film “The Follow Through,” a 25-minute feature which follows a young songwriter struggling with depression. “Of everything I have made in my entire life,” said Romstad, “this is what I am most proud of.”

Department of visual arts chair Milbert Mariano shared, “I have seen the festival blossom over the past few years. Film and television at PUC is an amazing community with students who grow, learn, and develop their voices as filmmakers under the mentorship of great faculty who give them the tools they need to succeed in their craft.”

The Diogenes Film Festival is named after Diogenes of Sinope, a controversial Greek philosopher. Diogenes utilized his simple lifestyle to criticize the social values and institutions of what he believed to be a corrupt or confused society. “Diogenes of Sinope walked around with a lamp in broad daylight,” explains the festival program, “claiming to be looking for an honest man. As filmmakers, we search for the truth, whether it is in the world around us or in the recesses of our mind.”