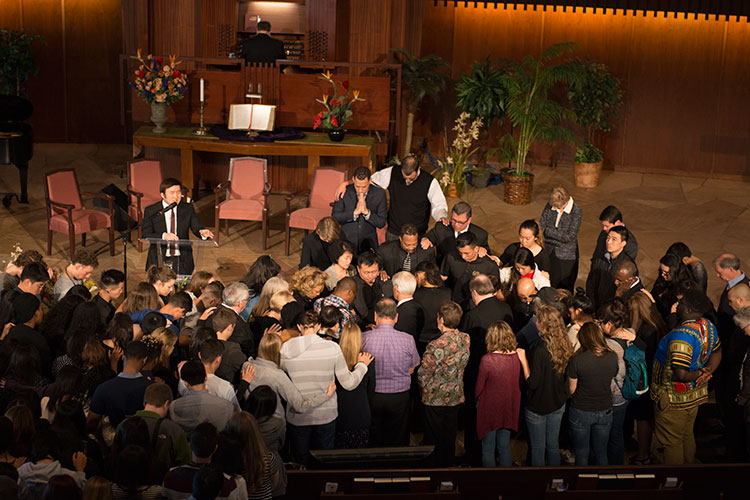 On Thursday morning, March 31, the Pacific Union College campus family gathered in the PUC Church sanctuary for a memorial service celebrating the life of Fen Pan, a student who passed away following a tragic vehicle accident on Monday afternoon.

College president Heather J. Knight thanked the many students, faculty and staff, and community members in attendance, and noted messages of condolences have been pouring in from other sister college campuses and other Adventist dignitaries around the world. The service was also broadcast online for those unable to attend, including Fen’s mother and 14-year-old brother in Beijing, China.

Fen was remembered through shared memories, a homily by campus chaplain Jonathan Henderson, and music, which was particularly meaningful as she was a music major preparing for a career in dentistry. Junior business and pre-dentistry student Ivan Lee, who was Fen’s teaching assistant for her organic chemistry lab, performed “Méditation” from the opera Thaïs by composer Jules Massenet, accompanied by department of music professor Dr. Rachelle Davis. Lee shared he felt moved to perform the piece following news of the accident, and stated, “I remember her being the most positive, diligent, and hardworking person, who always had a smile on her face.”

Assistant campus chaplain Shantel Smith read scripture from 2nd Corinthians 4:16-18. She fondly recalled the times she has spent with Fen in residence hall worships and remembered her as “a beautiful spirit… and a ray of light.”

Winning Hall dean Denise Grant, Fen’s residence hall dean, shared personal memories of her during the service. Grant said Fen was a girl who loved her family. She said Fen and her father, Peter Pan, had just spent spring break touring Northern California. “She loved her friends,” said Grant. “She was known as ‘the bridge.’ Fen was always the one who helped reconcile differences between friends, saying “Peace is always better.”

Her friends remembered Fen as being silly, funny, caring, and forgiving. “She had a bright outlook on life, and everyone who knew her, she shared that with,” said Grant. “Our dear friend Fen’s life was cut short, but she made a difference in many lives while she was here. She will live on in our hearts forever, and in her memory I hope we can be more like her and take care of each other.”

Campus chaplain Jonathan Henderson gave a short homily focusing on the story of Lazarus found in John 11. “Death is not part of God’s vocabulary,” he reminded the audience. “Our friend is sleeping. She’s not hurting, she’s not in pain … God has something better … So grieve, and weep, but don’t lose faith, don’t lose hope because something better is coming around the corner.”

Following the homily, Dr. Young-Chun Kim, assistant professor of systematic theology, ended the service with a moment of silence for Fen. He also asked the crowd to remember students and faculty at other Adventist institutions who have recently passed away. For closing prayer, the campus family gathered around Fen’s father, her host family from Southern California, and other visiting family members, offering their support.

Fen’s academic advisor Bruce Rasmussen, associate professor of music shared, “I am deeply saddened to hear of Fen’s death. She will be missed by all who knew her. She was a wonderful and talented person with a good heart. She had a gentle, graceful, and thoughtful personality. Our family mourns with her loved ones, and we pray for God’s loving arms to surround her family and friends.”