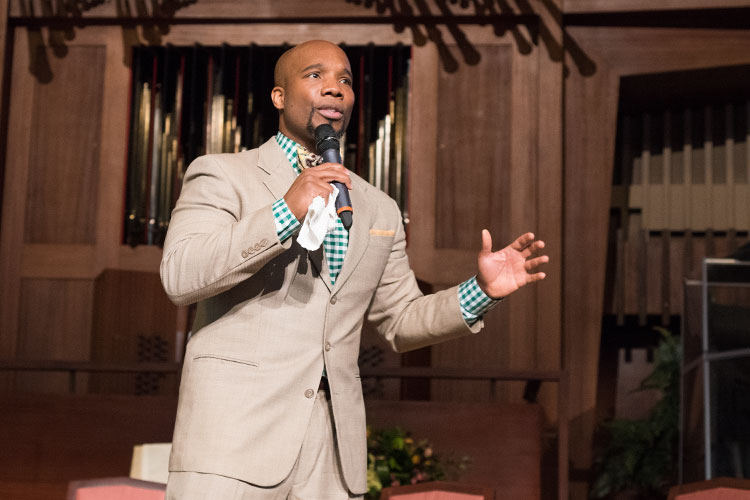 Back by popular demand, musician and orator David Anthony Johnson returned to PUC’s Colloquy Speakers Series on April 30. Johnson, an alumnus of Oakwood University, has won multiple awards during his 30-year musical career, and has shared the stage with many names of note, including Rosa Parks, Johnnie Cochran, Maya Angelou, Take 6, Brian McKnight, Julian Bond, and others. Johnson’s Martin Luther King Jr. Remembrance Colloquy on January 8 featured his oration talent, imitating the style and manner of the eloquent equal rights activist. This time, however, Johnson spoke as himself, his speech entitled, “The Greatest of These.”

After President Heather J. Knight introduced Johnson, he began by singing a song called “Ordinary People.” Johnson then shared his story of when he was a probation corrections officer in San Bernardino County. Johnson explained that in this role, he didn’t want to come across as soft, so he tried to hide his Christian faith from the inmates and the rest of the officers. “I tried to do everything that the world would do,” he said, as he explained that his “tough” act was only a false front.

Johnson said he realized his pride was not allowing him to minister to the inmates, even though many of them were in desperate need of prayer and guidance. Finally, he met with a “sink or swim situation,” during which he chose to share a heartfelt prayer with an inmate who had just suffered a personal loss. “Love isn’t love until you give it away,” Johnson repeatedly emphasized.

“God didn’t just allow me to go in there to teach [the inmates] something,” Johnson explained. “He allowed them to teach me something.”

Surrounded by men who had been incarcerated for attempted murder and other crimes, Johnson learned that his mantra of giving love away had earned him the support of the inmates, particularly when the other probation officers became jealous and tried to smear his reputation. Johnson ended by encouraging PUC students to share their love. “The love seeds that you’ve planted will one day sprout…and one day they will be a blessing to you,” he said. “If you love [God], keep His commandments…love thy neighbor as thyself.”