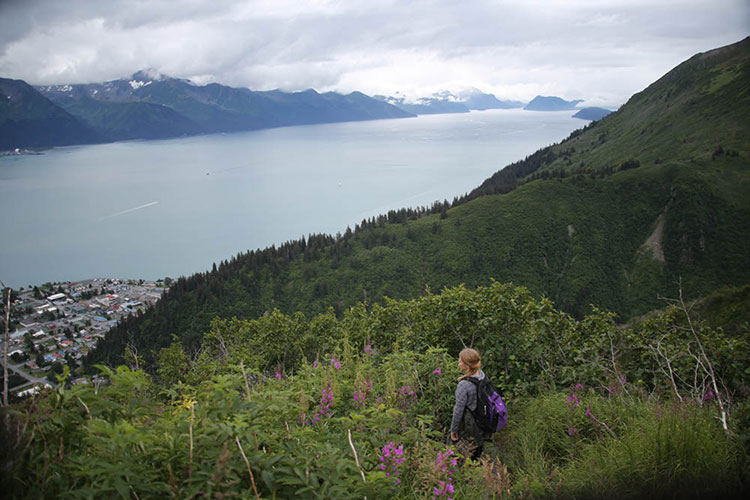 Grizzly bears, Dall sheep, moose, and orcas are unusual college classmates. Pacific Union College students enrolled in this summer’s Polar Biology class encountered these animals and more as the thriving Alaskan ecosystem became their classroom during an 11-day immersion into true field biology. After flying from San Francisco to Anchorage, PUC biology professors Floyd Hayes and Scott Herbert led their students to the city of Seward and on to Denali National Park. The course focused on the natural history of the region; students observed and studied plants and animals first-hand in their natural setting.

Living in relatively close quarters with the native wildlife and experiencing the immediacy of the learning environment were incredible learning experiences. “Being able to see and experience the sights and sounds of Alaska firsthand is a much better learning experience than looking at photos and videos in the classroom,” explained Hayes. “You can’t forget watching salmon spawn while wading in a frigid river, a killer whale swimming right under your boat, clown-like horned puffins perched on narrow ledges of an island cliff.”

Sophomore environmental studies major Dylan Turner said the trip significantly helped him broaden his understanding of ecology through direct interaction with the environment. “It’s one thing to see or read about such places and experiences on a presentation or in a book,” he stated. “But when you have the opportunity to live in it, there’s nothing quite like it.”

The PUC travelers will not soon forget the breathtaking scenery of the mountains, ocean, and tundra. “Upon arrival in Seward, looking over Resurrection Bay—the enormity of the bay and the huge mountains everywhere! It was and is simply immense and awe-inspiring,” said Herbert. The class took a nine-hour boat tour through the Kenai Fjords National park near Seward, where many of them saw remarkable species of polar animals for the very first time, as well as a cave-in on the Northwestern Glacier.

Senior Ashley Cotter said the Alaskan landscape felt like something out of a fantasy. “We hiked a hill called Mount Marathon in Seward, Alaska,” she reported. “It was strenuous and difficult, but the view was incredible, and the landscape unlike anything I’ve seen anywhere else. Not going to lie, I kind of felt like I was in The Hobbit.”

Exploring Alaska on the road, the ocean and white water, rugged hiking trails, and steep rock faces, was an immense experience for both students and teachers. “I would imagine that [the students] gained an appreciation for the sheer magnitude of the land up there,” remarked Herbert.

The Polar Biology course is the latest in series of recent study tour opportunities for biology majors. Over spring break during the last two school years a Tropical Biology course led by Hayes has travelled to the Brazilian Amazon in conjunction with a PUC mission trip. Hayes’ colleague Aimee Wyrick took her summer quarter Biological Foundations students for a one-week field biology experience at the Albion Retreat and Learning Center, PUC’s campus on California’s Mendocino coastline. In addition to the outstanding academic settings provided by these tours, the opportunity to travel together forms lasting friendships. “It was a great opportunity for us all to come to know each other much better,” said Wyrick following the week at Albion. “The students really bonded and it felt like a family. Having the group in camp also facilitated learning. There were fewer distractions and so more time to spend on the class and studying.”

In addition to the study tour opportunities, many on-campus biology classes take advantage of the ecological diversity surrounding PUC’s Napa Valley setting by regularly accessing nearby streams, lakes, fields, and forests. Internships also often include a field biology element; recent student internships have taken students out of the laboratory to research animals and plants where they live and grow.