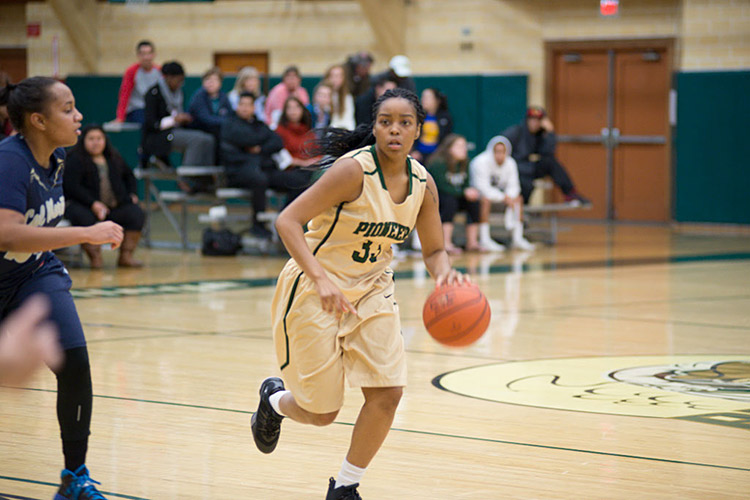 Two players from PUC’s men’s basketball team were recognized for their excellence on the court. Junior forward Jordan Greenwell was named to the National Association of Intercollegiate Athletics California Pacific Conference First Team and junior guard Trevor Noguiera was named to the Conference Second Team. Greenwell started in all 31 games, averaging 14 points per game. He led the Pioneers in scoring with 434 points, as well as in rebounding and assists. Teammate Noguiera finished the season with 333 points while struggling with injuries during the season.

“Both of these players are very deserving of the awards they received and were instrumental for us this season,” commented Kirt Brower, men’s basketball head coach and the college’s athletic director. “I am very proud of them for achieving this and I know both of them are already working hard to ensure we achieve more of our team goals next year.”

Lady Pioneer London Robinson, guard, was named to the Cal Pac Conference Second Team and was also named the Cal Pac’s Freshman of the Year. Robinson, who was a four-year varsity starter for the Oakland Tech High School Bulldogs, played in 24 of the Pioneer’s 27 games and averaged 11 points per game, finishing the season with 263 points.

“London is a phenomenal freshman,” shared head coach George Glover. ”I am very proud of the accomplishments she has had this year and I am looking forward to working with her over the next three years.” The Lady Pioneers ended the season with the best record in recent years, and have a strong foundation for continued success.

The end of the season also meant saying goodbye to seniors Chris Miller, Charles Meighan, and Rachel Kaneakua. Both the men’s and women’s teams won at Senior Night, their last home game, defeating the University of California, Merced Bobcats on February 8.