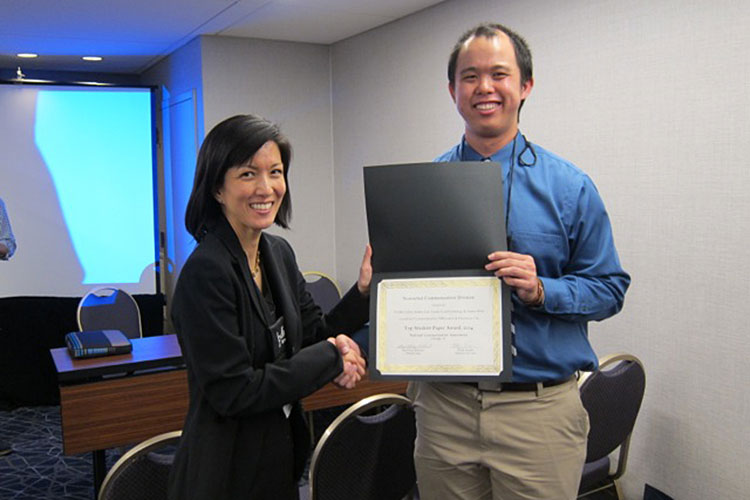 For some seniors, a group research project is a means to an end — graduation.

But for Webbo Chen, Jessica Lee, Linda Lumintaintang and James Shim, it became something more.

In addition to being accepted to present at the convention, the group also received the Stephen A. Smith Top Group-Authored Undergraduate Research Paper award in the Lambda Pi Eta Division. This is the third straight year that Pacific Union College students have won this award.

“I am so pleased with all [Lambda Pi Eta] has done to nurture our exceptional undergraduates,” said Smith, a communication professor at the University of Arkansas. “I am most gratified that it has supported and recognized the research contributions of distinguished students such as Webbo Chen.”

In addition to the Stephen A. Smith award, the group also received the Top Student Paper award in the Nonverbal Communication Division.

"We only give the award if the student paper is of high quality," said Amy Ebesu Hubbard, chair of NCA's Nonverbal Communication Division and professor of communication at the University of Hawaii. "PUC's paper won out of all students in this category, including those in master's and Ph.D. programs."

“It was truly an honor and I’m very grateful to have received both awards,” said Chen, who attended the convention to present the paper on behalf of his team. “This experience was the highlight of my college career.”

“Only 28 percent of research papers submitted to the convention were accepted this year,” said Tammy McGuire, professor of communication. “So that makes their awards especially meaningful.”

Shim attributed most of the group’s success to McGuire. “On the first day of class, she said even though we are a small school, our final product will be as good as or better than any other top university,” said Shim. “Without her guidance, we wouldn’t have come this far. She believed in us.”

Chen agreed. “Dr. McGuire made completing a 20-week research project achievable,” he said. “She had a step-by-step process for everything and had a great balance of being hands-on and also letting us figure things out on our own.”

McGuire is clear with students about the high quality she expects when they register for Communication Research — a capstone course for all communication majors. “They need to produce a conference-ready paper,” she explains. “I also tell them they can’t embarrass themselves, our department or the college. Whether they win anything (if they decide to submit their paper), that’s a bonus.”

What students learn from research experience translates into other areas of their personal and professional career, according to McGuire. Students learn to find and use resources through literature reviews, make an argument for the significance of their work, use basic statistics to analyze data, work in a group for an extended period of time, and complete a comprehensive project for an external audience. “The ability to work with others is one of the most desired skills that employers want,” said McGuire. “We are trying to teach our students valuable and useful skills they can take with them beyond the classroom.”

So far, it appears McGuire’s tactics are working.

Lumintaintang and Lee, PUC’s first health communication graduates, are in their first year of graduate school at Loma Linda University for pharmacy and occupational therapy, respectively.

Shim, a communication graduate with a marketing communications emphasis, landed a job as a creative project developer for BG Sports Enterprises, an LA-based brand and marketing development agency for professional athletes.

Chen, who left the aerospace engineering program at UC Davis to study journalism at PUC, is still in the process of deciding which avenue to take in his career. “There are so many things I’m interested in, from media relations and writing to public relations and client services. The possibilities are endless,” said Chen.

What makes McGuire especially proud is knowing her students can “hold their own” when they are outside of Angwin. “PUC is this little place on the hill, and it’s so gratifying to see our students presenting at a national conference in a way that meets or exceeds those who come from larger universities,” says McGuire. “I think that speaks well for the quality of education at PUC.”