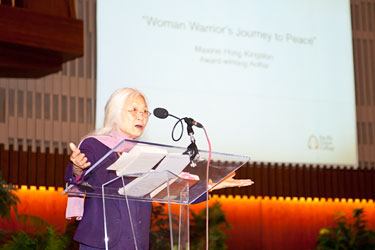 Critically acclaimed author Maxine Hong Kingston spoke at Pacific Union College, May 31, on the “Woman Warrior's Journey to Peace” in the latest and final installment for the year of the Colloquy Speaker Series.

Kingston spoke about how she became involved in anti-war activism during the Vietnam War and protested against military action before the 2003 U.S. Occupation of Iraq.

Speaking on how she and her husband aided AWOL soldiers in Hawaii during the Vietnam War, Kingston noted the important role one’s conscience plays in life. “I truly believe that what protects us from harm are our values, and our conscience, and being able to know what that conscience is saying.”

Kingston said that peaceful values can be traced back through the history. “These values of non-violence, we can trace them to Martin Luther King, Jr., and before him, to Ghandi, and before Ghandi, to the American Transcendentalists,” she said.

Thoreau opposed the First American Intervention (Mexican-American War) and even refused to pay taxes in protest, Kingston noted, but he could not get away from the signs of war. “Even in the quiet of Walden Pond, he could hear the music coming from his neighbors, and it was Marshall Music and they were getting ready to invade Mexico,” she said. “The consequences that war, of our taking of Mexico, those consequences reverberate to the present day as we put that fence across the border, and we put soldiers and drones on that border with Mexico. This is the same war with all its consequences.”

Kingston recounts how her thought and study of non-violent ideologies left her wondering how she could carry out her values of peace, when in 2003, the United States government began preparing for a “shock and awe” campaign against Iraq. At that time, Kingston was among a group of women who went to Washington, DC to protest what eventually became the U.S. Occupation of Iraq.

“What we did was that we brought our tactics of non-violence, that means that we would have a demonstration in which we would just feel love for each other and for everyone, and it would be a non-violent demonstration. No throwing rocks and no baiting the police or anything like that, and it truly worked. It was so peaceful.”

The love she felt with other demonstrators continued, Kingston said, even when they were arrested and held in jail for the maximum amount possible without being charged. “It just made me believe there is such a thing as human love,” she said. “We were singing in jail, we were singing our peace hymns, and we felt really happy... they let us go, and then we were still happy.”

When only 21 days later the occupation began, Kingston said she felt despair and questioned whether non-violence was effective. But then she concluded, “Maybe our efforts will have an effect, not right away, not in 21 days, but maybe 100 years from now our love will reverberate.”

Prior to Kingston’s presentation, Pacific Union College President Heather Knight introduced the day’s programming recounting how Kingston rose from her humble roots, the daughter of Chinese immigrants who operated a Stockton, California, gambling house, to become the critically acclaimed author of Woman Warrior, a story Knight described as the quest for female empowerment. Kingston also wrote its sequel China Men, and more recently The Fifth Book of Peace and To be the Poet.

Kingston was awarded a National Humanities Medal by President Bill Clinton in 1997 in recognition for bringing the Asian-American experience "to life for millions of readers and [inspiring] a new generation of writers to make their own unique voices and experiences heard."

Following her presentation, Kingston signed copies of her most recent book, I Love a Broad Margin to My Life in the Dining Commons and held a luncheon with students from the department of English where she took questions from the audience.