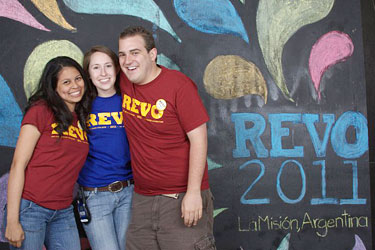 PUC’s student-led philanthropy organization REVO officially reached its dollar goal last week, just in time to conclude its campaign with the close of the school year. This year’s goal was $10,000 to fund a self-sustaining community kitchen in Argentina’s impoverished province of Salta.

The final donation that put the fundraising over the top was a gift from a group of 15 students led by Julov’ Pierre. The group took second place at the SA talent show in April with an elaborate multimedia performance built around the theme “Heal the World.” As the REVO campaign came to a close, the group collectively decided to donate their cash prize.

“We decided to make something that people could remember,” says Pierre, a native of Haiti who feels a deep connection to the cause of international humanitarian responsibility. “REVO[’s…] project corresponded with our vision and theme. It was a great pleasure.”

Immediately after receiving the full $10,000, REVO officers performed the next step of the campaign—getting the money into the hands of Adventist Development and Relief Agency (ADRA). The agency will take the lead on implementing the kitchen—building the facility, developing the attached garden and livestock supply, and training locals to run the facility themselves.

The total stands as the largest amount REVO has ever raised in a school year. “We settled on $10,000 thinking that it was a high goal--not really achievable but something to work towards. To sit back and realize what we have achieved makes me speechless,” says REVO coordinator Tyler McCulloch. “It was all the REVO volunteers, and the PUC family who supported us.”