PUC Hears the Story of Stuff 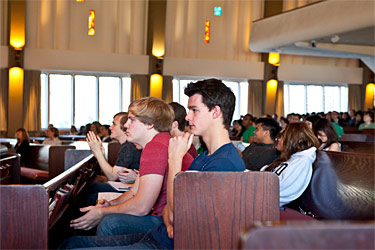 The Pacific Union College campus was enlightened on the effects of American consumerist behavior at colloquy on Thursday morning. In the annual “PUC Reads” edition of the campus-wide assembly, students, faculty, and staff had the chance to view a short documentary entitled The Story of Stuff by Annie Leonard.

The film, which has quickly become the go-to guide in the sustainability movement, explains the lifecycle of material goods in a “material economy,” addressing the detriment to people of third world countries and the Earth caused by wasteful habits of American culture. Leonard breaks down the process into five segments: extraction, production, distribution, consumption, and disposal. Her work is both critical of excessive consumerism and the power of corporations over the American government, and advocates environmental and social justice.

Leonard’s original book with the same name was assigned to first-year students in their English 101 classes by a committee called PUC Reads that, according to English professor Cynthia Westerbeck, “discussed the concept of having the entire freshman class read a single book as a way to expand the concept of PUC as a learning community.”

While the student response to the book have been mixed, with some individuals inspired to make changes in their consumptive behaviors and others disagreeing with the tone or subject of the book, Westerbeck stands by PUC’s decision to assign the book. “I hope the campus will learn the value of engaging in conversations about issues that are bigger than our individual classes or majors,” said Westerbeck. “Whether we agree on the extent or source of the problem, I hope we can all agree that we have a responsibility to care about these issues and be willing to think carefully about how we can be ethical consumers.”

Leonard will be the featured speaker at this year’s Green Week colloquy to be held Thursday, April 21, to discuss sustainability practices and their importance to the well being of both the natural and human world.