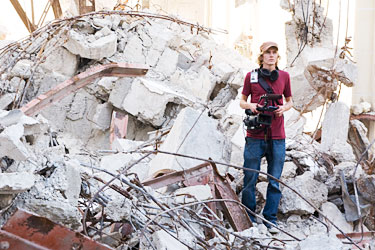 It was 5:52 p.m. on January 12, 2010, just one hour after a massive earthquake had hit Haiti, and Timothy Wolfer wrote an impulsive but sincere post on his Facebook page.

“Any one want to help a poor documentary film maker buy a ticket to Haiti?”

For most other people, the comment would have been nothing more than an offhand shot in the dark. But Wolfer, a Pacific Union College film and television major with experience filming in humanitarian crisis zones, was so serious that immediately after posting, he began packing his bags.

Six hours later, an anonymous donor supplied Wolfer with two airplane tickets. Recruiting a friend to assist, Wolfer headed to the airport that weekend. All flights to Haiti were cancelled, so he did the next best thing: landing in the Dominican Republic, Wolfer hitchhiked with his camera equipment across the border into Haiti—a wasteland of devastation and uncertainty.

Now exactly one year later, the resulting film, Adopting Haiti, will be released to a worldwide audience online on Wednesday, January 12. Mattoid Entertainment will screen the film exclusively on www.hulu.com.

The documentary follows the story of Maison des Enfants de Dieu, an orphanage in Haiti. Through a friend’s connection Wolfer had been invited to stay at the orphanage. When he arrived, he unexpectedly found himself in the middle of a developing story. In the wake of the earthquake’s destruction, the U.S. State Department was trying to evacuate the orphanage’s children out of the disaster zone. The situation had stirred up media frenzy, as Fox News and CNN descended upon the orphanage.

Wolfer captured more than 20 hours of footage, chronicling the plight of the orphans, the efforts of the orphanage staff, and the eventual military evacuation of those children who had American families waiting for them. Some of his exclusive footage was used on news broadcasts from Haiti; the rest he carefully sorted upon returning to PUC and began editing into a documentary initially called Taking Haiti Home.

His first screening of the work in progress, at the Cameo Theater in nearby St. Helena, was a big hit. The film was well received, and Wolfer invited Greg and Tawnya Constantino, adoptive parents who were featured in the movie, for a spirited and informative question and answer session.

Not long after, Wolfer was afforded a serendipitous opportunity. By chance, a friend and colleague met one of the heads of Mattoid Entertainment, an independent film distribution company founded by entertainment industry veterans Andrew Robinson, Jenna Edwards and Jeremy McGovern. Mattoid was seeking to acquire and distribute new documentary films. The colleague couldn’t give enough praise for Wolfer’s film, and by the end of the conversation Robinson asked for an introduction.

The resulting conversation and film screening impressed Mattoid Entertainment. “We…felt that it had a lot of heart, was well put together and really took you inside the world of those going through the aftermath of the Haiti earthquake,” says Edwards. “It is a heart-felt documentary that takes you into the trenches and was made by a wonderful filmmaker, so we are all very excited …to get the film out.”

Wolfer and Mattoid reached an agreement, and the company took over marketing and distribution while Wolfer retained rights to the film and final cut approval. Having worked with online distribution before, Mattoid felt that an online release would be the best outlet for the film to remain timely and to receive the broadest possible audience.

Wolfer’s next priority is to finish school and complete his bachelor’s degree in film and television at PUC. But in the long term, he plans to develop more documentaries—“something adventurous,” he says, that involves more travel and more opportunities to experience different cultures.

» Watch a clip from Adopting Haiti on CNN.com

» Read more about Adopting Haiti and a letter from Tim Wolfer at mattoidentertainment.com