Homecoming 2011: This Mountain Brought Us Together 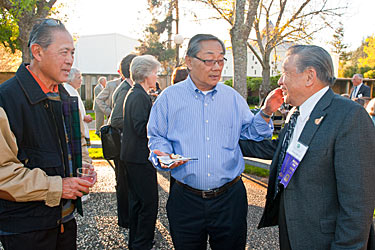 The celebration began Friday evening with the traditional Diogenes Dinner, a banquet honoring a person who has shown outstanding lifelong service to PUC. This year’s honorees were Ruth and Lyle McCoy, ’42 and ’45, two local alumni who have been intimately involved with the Angwin community and have given regularly and substantially in support of the college. President Heather J. Knight recognized the iconic PUC couple with another PUC icon—a beautiful watercolor painting of the old west wing of Irwin Hall by former art professor Vernon Nye.

Knight took the opportunity to announce her dream of restoring that historic structure, which was demolished in 1982 amid concerns of its structural integrity. The announcement drew pronounced applause from the attendees, as Irwin Hall has long been a rallying point for many of PUC’s alumni.

Following a short service honoring alumni who have passed away this year, Brigadier General Loree K. Sutton, M.D., ’81, presented the message at vespers in the PUC Church. Sutton, the recently retired director of the Defense Centers of Excellence for Psychological Health and Traumatic Brain Injury, is a decorated military doctor and was the highest-ranking psychiatrist in the U.S. Army. Her speech, “Stay Awake,” encouraged alumni and students to live a vibrant and passionate life, free from distractions and open to opportunities for transformation.

Sabbath morning, Sutton was one of three alumni that PUC honored. President Knight cited Sutton’s service to the nation and military, as well as her tireless advocacy of mental health care for active and former soldiers. It was Sutton’s second recognition from her alma mater. The other two honored alumni were Calvin Kim, att. ’92-’95, a Washington dentist who is a founder of the growing prayer and Bible study ministry ARME; and Ray McAllister, the first blind student to earn a doctorate at the Adventist Theological Seminary at Andrews University.

Steve W. Case, Ph.D., ’79 and ’80, presented the sermons at the Majestic and Gathering worship services. Case is a popular Seventh-day Adventist youth minister and author based in Carmichael, Calif. In his twin sermons, “Holy Smoke” and “Holy Fire,” Case spoke about trusting in God and taking inspiration from glimpses of His power.

The afternoon brought a variety of programs and events for alumni to attend. Following a catered luncheon in PUC’s Dining Commons, alumni browsed among booths showcasing many of PUC’s academic departments. The music department put on a concert featuring I Cantori, the string ensemble, and the handbell choir. Don Kellogg, M.D., from the honor class of ’61, exhibited a collection of landscape photographs in Rasmussen Art Gallery.

The Friends of Walter C. Utt met in Nelson Memorial Library, honoring the legacy of the beloved history professor who taught at PUC from 1951 to 1985. Several of Utt’s former students recounted memories of the professor, and group co-founder Bruce Anderson, M.D., ’60, and retired professor Gilbert Muth presented an oral history project consisting of video interviews of Adventist and PUC figures in their 90s and above.

PUC librarian Gilbert Abella offered a tribute to the man who was to be the project’s next interviewee: Thomas Geraty, Ed.D., ’37. Geraty, currently PUC’s most senior male alum at 96, had planned to attend Homecoming and sit for an interview, but at the last minute was unable to come.

Academic vice president Nancy Lecourt presented the group with plans for the two-phase plans for the renovation of the library. According to Lecourt, phase one will transform the main floor of the library from a collection of books into a space which will facilitate collaborative learning and technological integration. Phase two will physically connect the library’s “learning commons” with the media services office housed in the building’s south wing. The project will also create showrooms for PUC’s unique academic collections—including a wealth of Utt’s unpublished documents, a proposed Walter C. Utt Center for Adventist History, and the Pitcairn Island Study Center.

Sabbath evening ended with a mixer on the campus mall, where the local bluegrass group Flat Earth String Band played a variety of classic hymns and spirituals as the sun set. Following a sundown worship by PUC outreach chaplain Norman Knight, D.Min., many alumni dispersed for individual parties celebrating the honor classes.

The final event of the weekend was Sunday morning’s REVO Run, a 5K race and 3K walk raising funds for a student-chosen philanthropic cause. A mix of about 100 alumni, student, and local runners contributed their entry fees to this year’s project, a sustainable community kitchen in Argentina’s underdeveloped province of Salta.