Astronaut Jose Hernandez: “Don’t Ever, Ever, Ever Give Up” 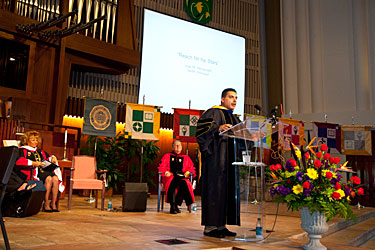 At a presentation at Pacific Union College yesterday, NASA astronaut Jose Hernandez encouraged students to persevere in their lifelong pursuit of ambitious goals. “Don’t ever, ever, ever give up on yourselves, because you can do it,” he said to an overflow audience in the PUC Church.

Hernandez addressed PUC students, faculty, and staff at the morning Opening Convocation, the ceremony that represents the formal start of the school year. Beginning with a clip from his TV interview on Oprah, Hernandez recounted his inspirational journey from the strawberry fields of California’s Central Valley all the way to his 5.7 million mile voyage with the International Space Station in 2009.

The astronaut, who has received a flood of media attention because of his inspiring story, also revealed that at the urging of President Barack Obama, he is considering a run for Congress in California. He plans to announce his decision on October 11.

The son of migrant farm workers who traveled with the growing seasons from Michoacán, Mexico to the farmlands of California, Hernandez grew up picking produce alongside his brothers and sisters. His parents, despite having only a third-grade education themselves, did their best to keep the children in school as much as possible. “They were master motivators,” says Hernandez. “After a long day of work, my dad would look each of us in the eye and say, ‘You have the privilege of living your future now. If you don’t want to go to school, you can come back and work with me in the fields seven days a week.’”

At the age of nine, Hernandez discovered his dream of becoming an astronaut when he watched the final Apollo lunar mission on TV. “I kept running outside to look up at the full moon, then back in to watch him walk across the surface,” he said. “I couldn’t believe that in 1972 we had humans on the surface of the moon.”

When he shared his newfound dream with his parents, they sat him down at the kitchen table and gave him what they called the ingredients to succeed: a clear goal; an understanding of the steps to get from where you are to where you want to be; hard work; education; and corazon—heart. “I remember thinking, ‘Wow! My parents actually think I can be an astronaut!” he says. “Really, they were giving me a license to dream.”

At the urging of a concerned teacher, the Hernandez family began to put down roots in the Stockton, Calif., area in order to give their children a better environment for effective learning. Graduating from high school with good grades, Hernandez enrolled at the University of the Pacific in Stockton, overcoming initial difficulties to earn a B.S. in electrical engineering.

After the morning presentation, PUC held a special luncheon in Hernandez’s honor. Guests included Hispanic business and civic leaders from the Napa Valley, Latino members of PUC’s faculty and staff, and several of PUC’s engineering, aviation, and Latino-heritage students. Hernandez continued his story at the luncheon, elaborating on how the conscious career decisions he made after graduation steered him ever closer to his goal.

“It takes perseverance, but it’s got to be smart perseverance,” he said, describing his career during his 12 years of continuous reapplication to NASA’s astronaut training program. “Each year I applied, I was also navigating my career to maximize my potential for selection.”

With the dream of space travel still foremost in his mind, Hernandez took his first post-grad job in 1987 with the U.S. Department of Energy at the Lawrence Livermore National Laboratory—a weapons research facility that was developing an x-ray laser for deployment in space. After the breakup of the Soviet Union, he volunteered to lead a project coordinating American and Russian efforts to secure the two nations’ nuclear arsenals. “It wasn’t because I wanted to go work in Siberia,” he said. “It was because I had heard that the U.S. and Russia had signed an agreement to work together on an international space station.”

Continuing to seek out anything that would give him an edge on his NASA application, he earned a master’s degree, learned Russian, became a certified pilot, and took SCUBA training. Each year he applied, he got further and further in the selection process. Finally in 2001, the space agency gave him his most encouraging verdict yet: Come work for us so we can get a closer look at you as a candidate.

Hernandez relocated his family to Houston, Texas, taking a job as a research engineer at NASA’s Johnson Space Center. He was finally selected for Astronaut Candidate Training in 2004, training as a jet pilot, performing rigorous physical preparations, and learning the technical aspects of operating the spacecraft. In 2009 he was assigned to be the flight engineer on mission STS-128 aboard the space shuttle Discovery—a mission to dock with the International Space Station to deliver an astronaut and several tons of technical equipment.

Describing his mission’s midnight launch to the luncheon audience, Hernandez said it was the first time since that night watching the television in 1972 that he nervously wondered, “What am I doing?” The trip from the Earth to the space station takes eight and a half minutes, with the rocket accelerating from zero to 17,500 miles per hour. “The first four minutes feel like the best E-ticket ride at Disneyland,” he said. “The second four minutes, things really get interesting.”

The mission lasted 14 days, during which the shuttle crew witnessed 214 sunrises and sunsets as they orbited the planet once every ninety minutes. Hernandez described two profound revelations he experienced during the mission. Seeing just how thin the Earth’s atmosphere appeared from space, he thought, “That’s the only thing keeping us alive! It seemed so delicate, I became an instant tree-hugger.”

Second, recalling the multicolored maps one sees in elementary school, he realized that from above, he couldn’t tell where one country began and the next ended. “I had to leave this world to come to the realization that we are all just one.”

He took the opportunity to joke about his upcoming political prospects. “I used to say that we should send all our politicians into space to get that perspective—maybe on a one-way ticket,” he said. “Since I may be one of them soon, maybe I shouldn’t say that anymore.”

Wrapping up the lunch presentation, Hernandez answered several questions from the audience, expressing optimism about the Obama Administration’s controversial decision to end NASA’s operations close to the Earth. “The new plan is incentivizing private companies to take over low Earth orbit,” he said. “Been there, done that. We need to focus on bigger goals, like Mars.” But he predicted that we would need to return to the Moon and establish a permanent, intermediate base before launching off on such ambitious goals.

He also said his faith in God grew stronger from his experience in space. As he looked out from the shuttle window at the Earth below and the vastness of the universe beyond, he said, he realized, “I’m a scientist…but it’s too perfect to be a coincidence.”

Hernandez wrapped up the day at PUC by recounting his story to a group of several hundred elementary school children from Angwin, St. Helena, and Pope Valley. Unlike at the earlier presentations, he wore the bright blue flight suit he had worn during his astronaut training. He received round after round of enthusiastic applause from the audience of children.

Hernandez was the first speaker in this year’s Colloquy Speaker Series at PUC. Upcoming guests include Tracy Kidder, Pulitzer Prize-winning author of Mountains Beyond Mountains, on October 27, and documentary filmmaker Martin Doblmeier on November 10.