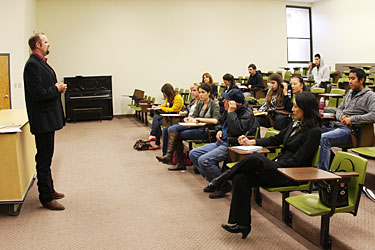 In a mini political series at Pacific Union College in May, the communication department invited the three candidates running for Napa County District 3 Supervisor to speak on campus during three different lunch hours. District 3 is the region in which the college is located, and candidates and campus people alike have an increased interest in how Angwin plays into local politics following land issues of recent years.

Students became interested in meeting the candidates after one, Michael Haley, spoke to professor Michelle Rai's fundraising class about the challenges in political fundraising and organizing a campaign. Rai decided to invite Haley back for a noon hour devoted specifically to his candidacy and issues in Napa County as well as inviting the other two candidates to give their own noon-hour presentations and question-and-answer sessions.

"I felt the political series would be valuable because I wanted the campus to have the chance to get to know these candidates on a more personal level than just newspaper articles or promotional mailers," says Rai, who notes that these candidates have a direct relationship to Angwin and the college. "Since the District 3 Supervisor represents Angwin, it seemed only natural that PUC would want to become better educated about the election and the candidates."

At their May 18, May 24, and May 25 presentations, each candidate introduced themselves and their Napa County background and spoke about their plans and priorities before fielding questions. Questions from students, faculty and staff included issues of public transportation through Angwin, economic stimulation, county spending, zoning, PUC and potential land development.