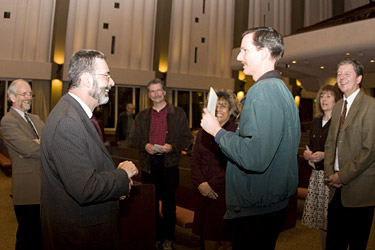 Neff proposed that, as Christians who look forward to Jesus' second coming, "we can love both the planet as we know it and the world as God will remake it."

The Longo Lecture was presented on the evening of January 28, but in the morning professor and lecture coordinator Greg Schneider and environmental studies major Molly Reeves interviewed Neff for the colloquy program. At that time, he talked about the founding of Christianity Today magazine by Billy Graham in the '50s and also opened discussion about environmental stewardship and how Christians do and should address it.

At the lecture in the evening, Neff presented a more formal and thorough look at how the Christians with a strong eschatology (theology regarding the end of the world and the Second Coming, etc.) have viewed the environment and environmental stewardship throughout history, recent trends and movements, and "how people with that kind of a faith focus can think best about caring for the environment."

Neff first talked about Christianity's theology about the physical world. He addressed different responses to natural decay and disaster, how we view resources, and our view of the stability of creation. He proposed that our "present environment is God's gift to us" as an engagement ring is a gift the looks forward to a future marriage, "allowing for the partial experience of something that will later come in its fulness."

As Neff explored how eschatological Christians should interact with our natural world and resources, he suggested that "the creation is limited, provisional, and Christians with an eschatological vision do not want to despoil the earth of its resources. Part of being human is learning to live and consume within limits."

In general, Neff expressed hope that Christians will see the big picture of a story that moves toward a renewed creation. "We do not serve by running from this world," he said, "but by engaging it."

Following the lecture, a group of people gathered for questions and discussion with Neff, raising some questions and ideas that took the lecture topic a step deeper philosophically and practically. Topics raised included the charge that Christianity ignores the environment countered by recent trends, especially among Christian college students, to be more engaged with environmental stewardship issues; Christians' tendency to be suspicious of scientific research regarding climate change; how God's vision for the future impacts our practical life choices now; and how people can put aside their selfish tendency to defend ownership of causes and work together to make a difference.