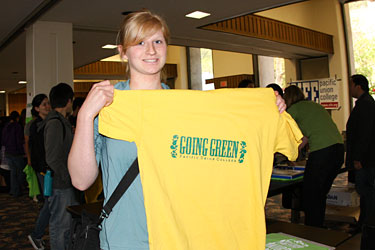 This year, Pacific Union College celebrated Earth Day with a fair, a clean-up project, and a special speaker.

L. Hunter Lovins, a globally recognized leader and consultant in sustainable practices, arrived with her signature cowboy hat to speak to members of the campus and community during the morning's all-school colloquy and a special evening lecture on “Sustainability in Napa County."

At the colloquy program, before Lovins spoke, environmental studies majors Dustin Baumbach and Molly Reeves shared about their internships, one working at the Marine Mammal Center in Sausalito and one at the Safari West wild animal preserve. Lovins then began her address by introducing the argument for why life as we know it cannot sustain itself; but rather than citing just environmental "drivers of change" and "intolerable signs," she addressed the spectrum from nature to economics to social equity. Then, rather than asking individuals to reduce their carbon footprint or some such practice, she suggested that if we are to meet the challenges and goals of the future and adapt to sustain the planet, we must do so on an entirely new paradigm. This includes "world best practices" for addressing human needs, smart development that is truly sustainable, redesigning education.

In the evening, Lovins developed her position further. Saturated with statistics on global energy usage and the millions of dollars spent daily, Lovins’ message focused on the “Sustainability Imperative,” the need for every person to begin change now. “Read 'leadership is extraordinary courage by ordinary people,'” she remarked.

Lovins gave examples of potential energy changes. She told of one corporation that saved $700,000 annually from shutting down their computers at night rather than leaving them on standby mode. Other companies have begun turning off lights, caulking window seals, and constructing energy efficient buildings, saving money in the process. “You can do the same thing here at this college,” Lovins declared.

It was not just big businesses that Lovins referenced, however. Recent changes by churches, hospitals, and even the military were addressed, evidence of the positive movement that is calling everybody to be “stewards of creation.” Lovins compared the transition process to the development of a butterfly from a cocoon: hard but worth it.

“We’re confronted with the fierce urgency of now,” Lovins asserted, quoting the words of Martin Luther King Jr., once a great pioneer of change himself. “We’re losing every major ecosystem on the planet. Are we going to be too late?”

Between Lovins two lectures, the PUC campus celebrated Earth Day with a small fair at the Dining Commons, with taste-tests of fresh juice, displays (including a table for the Environmental Studies program), and screen printing your own "Going Green" shirt – among other activities. Banners from the elementary student Earth Day poster contest were also on display.

A number of PUC students also participated in a clean-up day at Crane Park in nearby St. Helena, including planting trees, spreading bark, staining a shed, and cleaning picnic tables. Large groups of high school and elementary students from Angwin also pitched in to spruce of the park, totaling several hundred students from Angwin who joined the Earth Day project.