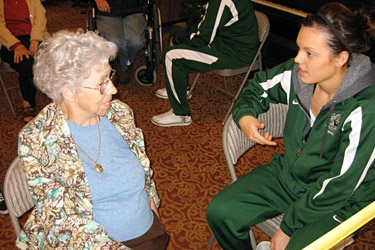 In between games, a group of basketball players took time for a different kind of endeavor — one that involved getting in the spirit of the holiday season and giving back to a community.

But the Pioneers also made a point of getting involved in the community in another way. In between their games, the team took time out to visit a senior living facility in Rancho Cucamonga, Calif.

For over two hours the players and coaches mingled with the residents, playing chair volleyball and other games, singing songs, and enjoying each others' company. The atmosphere was filled with energy, laughter and smiles. Several of the highlights included the basketball team helping the residents beat their “total hits” record in chair volleyball by over 200; singing “We wish you a Merry Christmas” in the lobby to over 50 residents; and a solo, performed by team member Vanessa Felder, to a couple who were celebrating their 50th wedding anniversary.

The visit ended with hugs and even a few tears. It was evident the impact the basketball team made on the residents. The director of the senior living home, Carol Warboys, told the team, “There was such friendliness, good-natured humor and love shown by each of your players towards our residents. Those positive feelings are contagious; it felt that we'd known you for a long time, instead of just a few short hours.”

But it was our players who felt they'd been impacted the most. “I thought it was an enriching experience," said freshman Lacy Jaymes. "I felt like we got much more out of it than what we put into it." The experience also fits perfectly with the PUC Women’s Basketball Program dedication to making a difference in the community. “It is so important to teach our student-athletes the value of giving back,” said assistant coach Doug Wilson. “We hope to do much more of this throughout the season.”