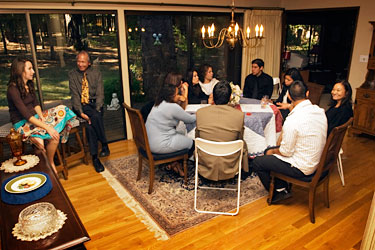 When I walked into Norm and Carolyn Low's St. Helena house late on Sabbath afternoon, they were looking a little stunned. I knew it had been a Home Lunch day - when church members invite college students home for a family-style meal - and the Lows often serve up to 30 students at their house. The day had been idyllic, so students could eat out on the deck; but I could see that something else must've happened. "You won't believe it," said Norm. "Oh, my, goodness!" exclaimed Carolyn. Norm finally explained: "We had 70 kids."

The Lows live in Modesto but make St. Helena their weekend home, and they are regular attendees of the Pacific Union College Church. Through Jessica Shine, then pastor of worship and outreach, the Lows got connected with a program called "Home Lunches" and joined on as hosts - though it was a stretch of faith (and personality) to do so. Before too long, they were helping Shine lead the program; and when Shine took a call to pastor in another church, they were left at the helm.

Home Lunches began about three years ago when the PUC Church staff was talking about how to get students more connected with other church members. At the beginning of the year, the church members sponsor "Welcome Back Prizes" for the students, and many offer lunches in their homes as the prize. The church staff decided to see if they could make that an on-going happening. "People really got behind it and had a great time," says Shine. At first, she says, it happened more in the background with specific students who started developing friendships with church members. Then, as Norm and Carolyn got involved with the program, it started picking up and becoming more widely known among students. Home Lunches now happens one Sabbath of each month, with hosts (who sign up to feed a certain number of students in their homes) standing in the church foyer before and after church services to sign up students and hand out directions.

In recent months, Home Lunches has grown by leaps. In March, four households served 93 people, 76 of whom were students. In April, the Lows had their record of nearly 70 students at their home alone! When that happens, it's sometimes a loaves-and-fishes scenario. Norm recalls one lunch when a student saw the number of kids and asked, "How do you do this?" He was a theology student, Norm explains, but waiting and wondering to see where the Lord led. Norm told him, "Here's for your faith. See all these people? Here, look in our pantry." The pantry, used only for their weekend visits, was empty. Norm showed him the fridge. Empty. The student said, "How did you plan it perfectly for this many people?" Norm replied, "We didn't, we planned for half. Now, watch how it works out." Later, when everybody had had enough to eat, the student came up to Norm, tears showing in his eyes, and said, "I needed that."

Hosting a home lunch isn't everybody's cup of tea, it's true. But for those who take it on, it's full of surprises and extra blessings for both students and hosts. One week, about 10 members of the I Cantori choir went to a Home Lunch. In the pre-lunch time, devoted to socializing, sharing, and making introductions around the circle, the choir members burst into song, filling the room with a cappella harmonies.

Another weekend, the Lows were thrilled when one of "their girls," student Stephenie Saunders, told them she was engaged. She had met Norm and Carolyn when her now-fiancé brought her to the first Home Lunch of the year, and since then had gone to every Home Lunch she could. "My fiancé and I always spoke about how special Norm and Carolyn's relationship was, and how they portrayed the role model of a solid, God based marriage," Stephenie says. "Their self-made atmosphere of love, affection, and family-hood has definitely made an impact in my life, and I just thank God for such wonderful people who have the willingness and the desire to serve others with their blessings. My fiancé and I are looking forward to following in their footsteps."

One student brought her mother and younger brothers, who were visiting. The mom told the hosts, "My daughter told me about this the first time she came... It's really a great thing, it means a lot to the kids - you can tell."

And the blessing works both ways, as the students open up to share pieces of their lives with the families who reach out and engage them. "The kids really are transparent," Carolyn says. "I'm amazed. They're willing to open up and share. They're such a rich blessing."

Clearlake Homeless Ministry: A Blessing to All