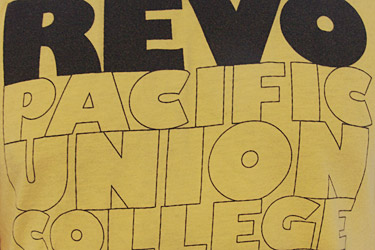 Last year, a student movement called Revo swept the Pacific Union College campus and raised over $10,000 for a shelter and vocational center for trafficked and abused children in Lima, Peru. This year, Revo is back - but students have decided to raise money for a Napa Valley cause.

"After a few weeks of researching, asking social work professors, and praying about it, we decided to support the Napa Valley Food Bank," says student Revo leader Grace Jung. The reasons for the choice were numerous, including a timely response to the economic downturn, emphasis on the fact that you don't have to travel oversees to help those in need, and the hope of involving the wider community in the Revo movement. But the foremost motivation for supporting the Food Bank is hunger. "There are people in our own backyard that desperately could use our help," Jung says. "The issue of hunger is becoming very real to more and more Americans. It is not a poverty issue anymore; it is creeping its way into the middle-class, forcing children, single mothers, businessmen, senior citizens, and many more to go to bed hungry at night."

As Jung reports, the number of individuals experiencing hunger is rising in our community. "The Napa Valley Food Bank reported at least a 20-30% increase in recipients within the last year," she says. "For the first time ever, they ran out of food and had to begin purchasing food." The food bank, which has many beneficial programs other than a food pantry, services at least 11,000 people per year. "They are an amazing and necessary asset to this community, and we'd like to make sure they are able to continue for as long as possible," Jung says.

Revo is a student movement that started around two years ago in Hawaii and has spread to major cities including Orlando, Philadelphia, Baton Rouge, New York and Las Vegas. Each Revo event is different, but with the goal of raising awareness and funds for different causes. "The core of Revo promotes the idea that anyone, especially young people, can change the world into a better place from where they are NOW, with what they have NOW," Jung explains. In addition to Jung, nearly 20 students are working on the Revo team to do everything from PR to film to event organization.

Revo PUC 2009 is currently raising funds for its big event, which will take place on the PUC campus and be similar to last year's Revo event. On Sunday evening, May 10, 7-10pm, the Revo team will host a live concert, fashion show, benefit sale/auction, and concessions.

Revo PUC 2009 is looking for community and campus partners to help make the Revo event possible, and to raise both awareness and significant funds for the Napa Valley Food Pantry. To find out how you can get involved, write to revopuc@gmail.com. To donate to Revo, you can give online at www.puc.edu/alumni/give-online and select "REVO" under the "Fund Priority" menu.