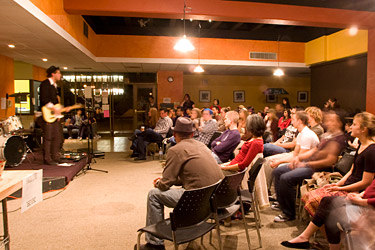 Motivated by the continued focus on service at Pacific Union College and on the national stage, the PUC chapter of Amnesty International (AI-PUC) has developed an ambitious program for 2009. Through continued use of awareness campaigns, guest speakers and a new program being pioneered at PUC that mixes music and social awareness, they are tackling the major issues of international justice and violence against women, as well as the inevitable human rights issues that pass across the world stage during the year.

As a creative and compelling way to call attention to areas of human rights concern, AI-PUC has developed a series of concerts called "Jamnesty." Jamnesty events feature information on current human rights campaigns intermingled with live music from local musicians.

The combination of music and activism is not unusual. The club's faculty sponsor, Gregory Schneider, professor of religion and social science, points out that the two have often gone hand in hand. "There has long been a synergy between Amnesty International and popular music groups," he notes. "Yoko Ono famously gave them the rights to the song 'Imagine,' and other musicians, from Tracy Chapman to Rage Against the Machine, have performed benefit concerts for the organization and the causes that it represents."

Instead of attempting to attract such high-profile acts, AI-PUC has worked with musicians from the college to establish a truly home-grown cultural movement. The first Jamnesty event took place in October and featured live music by The West Atlantic and Shearin Matute. Between acts, students in Amnesty International spoke about the International Criminal Court and violence against women.

Several more Jamnesty events are scheduled for the remainder of the year, each concentrating on a human rights issue of importance. Often the topic will be dictated by circumstances, as in the case of the violence in Gaza. During the January Jamnesty concert, which took place at the height of the conflict between Israel and Hamas, members of the Amnesty club presented stories of both tragedy and hope from the war-torn region along with an urgent action item from then Secretary of State Condoleezza Rice.

Aside from Jamnesty, AI-PUC continues to raise awareness through e-mail, campus outreach and screenings of documentaries in addition to planning Friday evening programs and a special all-school colloquy. On February 26, Naomi Roht-Arriaza, a professor of law at University of California Hastings College of the Law in San Francisco, spoke at colloquy about genocide and international justice. She talked about a case she's been working on since 2006, dealing with a genocide in Guatemala in which 200,000 were killed and 40,000 disappeared. Roht-Arriaza's presentation complemented Justice Without Borders, a documentary film by Amnesty International that was shown at a Jamnesty event the day before. Justice Without Borders explores the movement for globalization of justice and accountability for the most grave of human rights abuses. Many atrocities go unpunished when those responsible cross borders or because local governments are unwilling to act.

The fight to stop violence against women is not an isolated human rights issue. Women are more severely affected by humanitarian crises of all types and are often specifically targeted for assault and rape. In some countries, systematic violence against women goes unnoticed and unchecked, becoming almost endemic to a society. From civil war in The Congo to the prevalence of sexual crimes against Alaskan and Native American women, Amnesty International hopes to shed light on the many ways in which women across the world face routine cruelty and violence.

AI-PUC relies on the international and regional offices for information and guidance, but they are self-initiated and self-motivated. "Involvement in Amnesty International is a great way for students to get training and experience in the nuts and bolts of leadership," said Schneider, who has been involved in the club since its inception in 2002. "A variety of skills and gifts are welcome. It is a place where existing talents are discovered and developed. All that is required is to take seriously PUC's call to service in the lives of those around the world who are being mistreated."

Adventist Interns at the United Nations

Amnesty International at PUC: Keeping an Eye on Human Rights