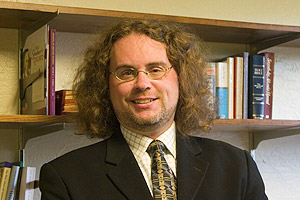 David Trim, a history professor from Newbold College, much-published author, and preacher, has come to Angwin from England for a one-year stint at Pacific Union College, financed by the Walter C. Utt Endowed Chair of History.

This visit is no vacation stay, however; as Utt Professor for the 2008 calendar year, Trim is teaching one class each quarter, giving two lectures, and engaging in research and writing for several in-depth history projects.

Trim was asked to come to PUC by the board of the Utt endowment, the college’s only endowed professorship. The endowment was established after the 1985 death of its legendary namesake, a PUC history professor who left a legacy of mentorship, brilliant lecturing, and authorship. Now, the professorship memorializes Utt and fosters Adventist scholarship by bringing great teachers to PUC and giving them time to focus their energies on research and writing.

A number of conferences and book editing and essay-writing projects, along with the Utt lectures and preaching appointments, are on Trim’s agenda during his time as the Utt professor. He’ll complete the editorial on a volume of essays on European Warfare, write an essay on the history of chivalry after the Renaissance, and write a paper on Walter Utt as historian for the Friends of Walter Utt lecture.

Though Trim is a scholar by nature and often published, the Utt professorship allows him a time of intense research and writing that he couldn’t have otherwise devoted to these projects. “I don’t know when I would’ve had the chance to finish them,” he says. “Thanks to the professorship, the smaller projects will be finished in the first half of the year, so the second half can be dedicated to Eternal War.”

Eternal War: Military Action and Terrorism in the Cause of Religion is the work that will consume the largest chunk of Trim’s time. It’s a 400-page global history of religious warfare, and it’s particularly relevant to Americans today. “Everybody’s aware that wars of religion are still with us,” Trim says. “They had never gone away, but people in the Western world thought they had.”

One of the book’s goals is to define just what a war of religion is. Trim will look at what makes a religious war different than others, what its distinctive characteristics are. He’ll look at how “contemplating eternal that leads us to violence here and now,” the theory that religion can make war worse or make it last longer, and the idea that religious wars can be impossible to “win” because, as he says, “In religious war, very often parties aren’t willing to admit they’ve lost. They won’t compromise.”

Beyond that, Trim says, “The book is trying to deal with two kinds of blindness – blindness of religious people who don’t want to admit that religion can be violent and blindness of atheists who say it’s an inevitable thing.” Part of his work is to “confront the fact that war and religion have been intimately related for millennia,” but also point out the many good causes that religion motivates people to support, demonstrating that religion doesn’t necessarily equal fanaticism.

Trim and his wife are living in Angwin for the year, while their daughter attends Rio Lindo Academy.
Prev ArticleNext Article