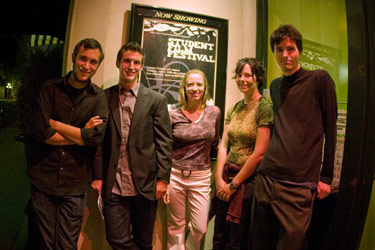 The films showcased the work of Aaron Marshall, Marcus Klonek, J.R. Rogers, Blake Penland, Allison Kurtz, Vienna Cornish, Kenneth McMillan, and Craig Church. “This work has been a year-long experience for many of the students,” said Eyer. “They poured heart, soul, and very long hours into these films.”

The most extensive of the films was a 25-minute drama by Church, The White Abyss. It was filmed with the innovative new RED digital film camera and professional actors — who also attended the screenings. “I learned a lot of things on this project,” said Church, who worked with a dedicated crew of actors, PUC students and instructors. “The biggest thing anybody gains… is being on a real film scene and not just another class. Taking everything you learned and coming together as a team trying to create this story… It was a big learning experience for me.”

This was the second year in a row that the film and television program has teamed with Cameo Cinema for the festival, with two showings to a full house at the small community theater in St. Helena. “[The Cameo] is a great venue to be able to enjoy films in,” said Eyer. “We’re so lucky to have this in St. Helena.”

After the screening, Eyer hosted a short Q&A session with the filmmakers and audience. Students talked about the learning that goes on with these projects. “Every time you do a project, you always learn more,” explained Cornish. Kurtz added, “Learning to accept criticism… is when your film really begins to grow.”

PUC president Richard Osborn expressed his gratitude to Stephen Eyer, who is launching into work as an independent filmmaker. “Thank you for a wonderful job you’ve done at PUC,” Osborn said at the screening. “Tonight I think you’ve broken a lot of creative ground.”