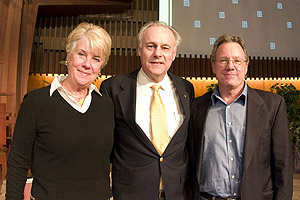 They weren’t wearing capes and they didn’t fly onto the stage, but the three local businesspersons who visited PUC for the January 17 all-school colloquy were welcomed as heroes.

PUC president Richard Osborn introduced Robin Lail, Norm Manzer, and Phil Toohey by saying, “What has impressed me about you is that not only are you successful at what you do, but you seem to have a passion for helping the community.”

Lail, a fourth-generation vintner of Lail Vineyards, told how she became a part of the St. Helena Hospital Foundation. “‘Should’ is my least favorite word in the language,” Lail said. “But I got involved because I thought I should.” She discovered, however, that “should” was only the beginning. “I found a passion for this institution and the community it serves that was way beyond what I’d ever imagined.” With her help, the foundation has already raised over $25 million for the first phase of a campaign to rebuild the hospital campus — an impressive sum, Osborn noted, even for much larger hospitals in big cities.

Lail’s drive to make a difference is no new thing for her. “About when I was 4, I was struck by the feeling that I had a mission. It was global in size, a mission to give something back to a broad base of mankind.” This mission has played out in Lail’s serving as an active member on various nonprofit boards, establishing the Volunteer Center of Napa Valley, and being a committed and generous businesswoman.

“It’s selfish,” Lail said unexpectedly of the service she does in the community. “Because it makes you feel so wonderful.”

Manzer agreed with that feeling. Almost 35 years ago he started a State Farm Insurance business in St. Helena. Manzer talked about the personal relationships developed in business and how his big question as he faces retirement has been, “Who will take care of these clients who have taken care of me?”

But that “selfishness” has been felt in his 26 trips to Russia in the past 15 years. As a member of Rotary, an organization bearing the motto “Service above self,” Manzer became the pen-pal of a Russian man in 1990. Eventually his pen-pal’s daughter came to stay with them as an exchange student. When she went home, Manzer made the trip as well and visited the family. He found that “we have everything, and they had nothing.” That was the start of his work, which has mostly focused on orphanages and has involved many others in the Napa Valley area, including PUC students. “The coming together we have in this community is unbelievable,” Manzer said.

Manzer added that he’d always thought a missionary was a person with a Bible in their hand. “Then I saw all these [Seventh-day] Adventist doctors and administrators and businessmen around the world and I said, ‘We can do that.’”

“My wife and I say, ‘If anyone else knew what we got out of this, they would think we were very selfish!’ It’s just a flood of satisfaction.”

The third “hero” Osborn interviewed was Toohey of Sparrow Lane Farms, a vinegar business that services restaurants around the world. But, Toohey said, he’s really a mountaineer, and he’s spent a lot of time in Nepal. In 2003 he went over for the 50th anniversary of Sir Edmund Hillary’s summiting Mt. Everest. Toohey expected to spend time basking in the stories of the great mountaineers. Instead, he ended up staying in the village, missing the Walk of the Summiters he had come to see and instead seeing the poverty of the local Sherpa people. When he did get a chance to talk to Hillary and asked him about the experience of reaching the top, the famed mountaineer said he wanted to be known for the hospitals and clinics he had built for the Sherpa people — not for summiting.

Toohey was inspired to start an unusual project for the local Sherpa people: providing wheelchairs. At his first distribution, he had 200 wheelchairs, and almost 700 people showed up. By now, he’s delivered about 3,000 chairs. “Lives can be changed by simple acts of kindness and faith,” he said, showing pictures of handicapped men whose lives had been revolutionized by the gift of a wheelchair.

“What you have here today, is you have faith,” Toohey told the gathered students. “We need our creed to be ‘We will leave this world better than what we had.’”

The program featuring Lail, Manzer and Toohey was one in a year-long series focusing on service. The winter quarter theme is “A Sense of Purpose,” with programs that introduce the campus to local organizations and individuals who have chosen as their main life purpose to serve mankind.  The goal is to encourage individuals from PUC to join local organizations both now and after leaving the college, with the expressed objective of living a life of purpose.
Prev ArticleNext Article