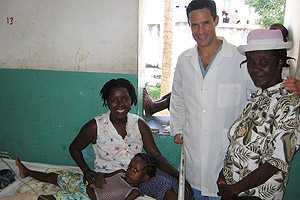 Scott Nelson makes the rounds in Haiti, where he performs corrective surgery for some of the poorest children in the western hemisphere.

Sacrifice and freedom are not things people typically pair in the same sentence. But surgeon Scott Nelson, '92, wants his life experience to inspire people to just that — “to make sacrifices and live with freedom.”

His story is, in some ways, straightforward. At the age of 8, he felt the first tug of destiny when he visited his grandfather Olavi Rouhe, a surgeon who spent 25 years of his career in central Zaire (and also a 1929 graduate of PUC). That visit sparked Nelson’s ongoing interest in medicine and, he says, “With a sense of adventure and a desire to serve it was only sensible that I would follow in his footsteps.”

Other influences were added to his grandfather’s. “I owe a great deal of thanks to Pacific Union College, Adventist education and a heritage of sacrifice and mission which we can proudly share with the world,” Scott says. At the PUC dining commons, Scott met one person who would be a big part of that influence: Marni Miller, ’91. After their PUC graduations, Scott and Marni married. “It is largely because of her sacrifices and encouragement that we have been led to do the work we do,” Scott says now.

Together, the two experienced Scott’s years of medical school, residency, and fellowship, and their first trip to the Dominican Republic. And at the end of 2004, they sold their house, packed all their belongings and car into an ocean container, and headed for Santo Domingo. “Not many doctor’s wives are willing to give up the trips to Nordstrom’s and a comfortable home to accustom themselves to a different culture in a polluted city without modern conveniences, not to mention the distance from friends and family,” Scott says.

But it was a move both of them were ready to make. “Ever since our first trip to the Dominican Republic six years ago, Marni realized that we needed to live in a place like this. Seeing children living a hard life with crooked feet and legs enter the operating room and then several hours later come out with dramatic corrections and the hope of a new life convinced her that we needed to mobilize ourselves.”

That’s just what they did. The difficult transition included four months living out of suitcases, only speaking a few words of Spanish, and trying to operate a hospital. But three years later, things are in full swing. Scott works for CURE International, an organization that seeks to combat diseases that often destroy lives and families in the Third World, but that are very treatable with modern medicine in the Western World. A hallmark of CURE is their teaching hospitals, through which they train national medical professionals and students in first-world medical techniques to help to raise the standard of medical care in the countries it serves.

Each of the eight CURE hospitals around the world is led by a spiritual director, executive director, and medical director. As the medical director of the hospital in Santo Domingo, Scott has administrative responsibilities, clinical teaching of orthopaedic residents, and a full-time surgical practice that mostly serves children with developmental, congenital, and post-traumatic deformities and disabilities.

Every three months, Scott also travels to Cap Haitien in northern Haiti, where he perfoms corrective surgery for some of the poorest children in the western hemisphere. “The grinding poverty in Haiti makes even some of the most well heeled travelers feel uneasy, but for myself I find it motivational,” Scott says. “Most of our patients in Haiti would live with life-long disabilities if we were not there to give them the treatment they deserve. … In many cases it is only a one- or two-hour operation that can make the difference between someone living with life-long disability or having a relatively normal life. For this we treat all of our patients with a high level of urgency, sometimes operating all through the night just to help a few more people.”

The impact of this work is immeasurable, but Scott reminds people that it’s a responsibility. “As Americans, as Christians, and as privileged graduates of a great institution, we have a responsibility to those around us who are less fortunate,” he says. “To turn our backs on this responsibility is to deny ourselves and others the true meaning of life and love.”
Prev ArticleNext Article