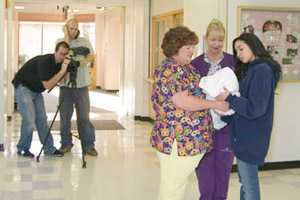 “Safe Surrender,” the 2006 documentary film produced by PUC film and television majors Brian Bazemore and Jackson Boren, has been making its way to hundreds of thousands of viewers across the country, and now earns further recognition with a platinum Ava Award.

Bazemore and Boren filmed, directed and edited the documentary for the San Antonio Community Hospital in Upland, California, about the Safely Surrendered Baby Law. The law, which allows parents to anonymously and legally give a newborn to a hospital, police or fire station within 72 hours of the baby’s birth, has been in place since 2001, but needed to be brought to public awareness.

The film debuted on October 11, 2006, to an audience of more than 200 distinguished educators, public officials, and law enforcement officers. Since then, the hospital has been working to distribute the film both locally and across the nation. In addition to submitting the project for various awards programs, they gave 150 DVDs to health-care participants in the 10th annual state Emergency Medical Services for Children conference, provided all the school nurses in the county with copies, and have made the DVD available to all area schools. Over 1,000 copies have been distributed in the area.

The response has been overwhelmingly positive. “It’s working extremely well,” says Jaynie Boren, vice president for strategic planning and business development at the hospital. “We get letters all the time from people.” She details a recent letter in which a child development and parenting skills teacher at a California high school talks about sharing the “Safe Surrender” film with her classes on a regular basis. So many of her students have pregnant friends and family members, she writes, and they’re very attentive to the video. “The film opens dialogue very well,” Boren explains. “It’s simple and gets to the point.”

Among those who have taken note of the program and film is American Health Journal, which develops public service programs for PBS. They approached the hospital and filmed a segment on the Safe Surrender film and program that has appeared on local PBS stations and is intended for distribution to over 150 national stations. The hospital has also been selected to participate in the 2008 Association of Womens Health Obstretics and Neonatal Nurses Convention, where more than 3,000 nurses from all over country will all receive a copy of the film.

With all this publicity, the recent announcement of the Ava awards was really no surprise. “Safe Surrender” received a platinum award—the highest level—from the competition, which is administered and judged by the Association of Marketing and Communication Professionals (AMCP). The Ava Awards recognize outstanding work by creative professionals in concept, writing, direction, shooting, and editing of audio-visual materials and programs. Over 1,700 entrants throughout the country submitted films to this year’s competition.

“It’s just amazing how we continue to win awards and to garner recognition,” says Boren, who’s thoroughly delighted at the opportunity two young film-makers have had to produce not only quality work, but a film that is already making a difference for thousands of young people.

“[Jackson and Brian] were given a topic and told to find out everything they could and create something that would be impactful,” Boren says. “I knew they’d do a good job—what I didn’t realize is how good a job…”

News image has been reprinted with permission from ADVANCE Newsmagazines.