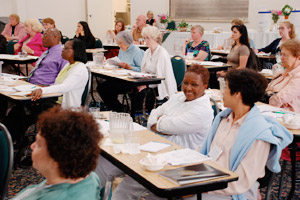 For the first time, the annual Seventh-day Adventist Nurse Educators Conference was held at Pacific Union College. Nursing instructors from several Adventist institutions traveled to PUC to participate in this year’s conference, entitled New Directions: The Changing Face of Nursing Education, which was held June 26-28. The annual event is structured to offer nursing educators practical resources that they can develop to help students, inform them about developments in media and medical technology in the field of nursing, and allow them to network and serve as a sounding board for one another regarding current issues in nursing education.

During the course of the conference, nursing educators heard from various presenters including Wynelle Huff, vice president for Delivery of Care at Adventist Health, and Marilyn Hermann, dean of the School of Nursing at Loma Linda University. Presentation content included information on media advances in the field of nursing and panel and group discussion on “Politically Charged Issues,” with an emphasis on students who fail nursing programs.

With so many factors playing a part in nursing education today, it can be hard to maintain balance and structure. In her introduction to the panel and group discussion held on the final day of the conference, Barbara James, Dean of Nursing at Southern Adventist University, likened nursing education to a chemistry beaker with many ingredients. With caregivers who have a duty to protect society, parents who want the best education possible for their students, and students who are working hard towards their goals of becoming nurses, James says, “It’s a miracle there are not more dramatic explosions.”

James feels the conference not only offers new information but gives the “opportunity to dialogue together, realizing we are more alike than different. We have many of the same issues.” She believes that the conference helps improve nursing education because it allows educators to “collectively learn from the wisdom of each other.”

Other nursing instructors also enjoy the side benefit of camaraderie in nursing education that the yearly conference brings. Sally Tochterman, assistant director of nursing at Atlantic Union College says, “I come because of the networking with colleagues. I’ve found that it’s very relevant to what I’m doing.” Lucille Krall, dean of nursing at Walla Walla College, says of the conference, “I get ideas. We get an idea if what we are doing is mainstream. You also get the idea that everybody else has the same problems.”
Prev ArticleNext Article