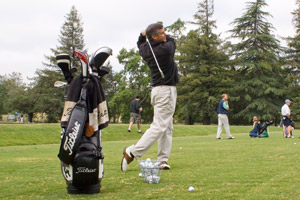 Pacific Union College’s 15th annual Malcolm Maxwell Golf Classic, a charity event that raises funds for PUC scholarships, took place at the Silverado Country Club May 16. The tournament, which is PUC’s biggest community event, raised $50,000 for the second year in a row.

In recent years, the Malcolm Maxwell Golf Classic, named for the former president of the college upon his retirement, has become a major source of funding for PUC student scholarships. Proceeds go to “Golf Scholarships,” which are awarded yearly to students based on need.

One hundred and forty-four golfers teed up in teams of four under a cloudless blue sky, beginning at 10:30 a.m. and rotating holes until they had all finished the course at around 4 p.m. Teams kept their own score throughout the 18-hole tournament and turned in their scorecards at the awards dinner. The scores were tallied while the golfers ate and took part in live and silent auctions. When the results were in, the winners were announced and given their prizes.

The day-long event was funded completely through donations and sponsorships, allowing all proceeds to go directly to student aid.

PUC holds the event for more than fundraising purposes. For any college, a community connection is a valuable resource.

“This has been one of our best ways of involving the community,” said Dick Osborn, PUC president. “Many people from the local community look forward to coming every year.”

Many of the participants were indeed veterans of the event, including some who have been coming since its launch in 1992, when it was called the Napa Valley Golf Tournament.

In addition to supporting PUC’s educational standards and influence in the community, many recognize the college as a valuable partner. Dr. Robert Williams, D.D.S., whose office is located across the street from the campus, paid for the golf balls.

“For local businesses, a relationship with the school and the community is one of the most important things,” he said. “This is a great opportunity to get out here, support the school and talk to students and faculty.”

Some of those who brought out their clubs were themselves sponsors, but many played courtesy of a donor. For these lucky participants, the event was a chance to enjoy the spring weather on the greens and fairways of one of the Valley’s finest courses.

Andy Bishop attends PUC and played on the student team, sponsored by Triad Communities, LP. “I’m excited to be out here,” he said. “It’s a nice course and the weather is great. It is a privilege to be able to participate.”

Awards were given for lowest team scores both with and without factoring in handicap, longest drives for both men and women, and closest to the cup on all par 3s. Putting enthusiasts could also test their mettle in a 25-foot putt competition.

Winning teams received a $100 Silverado gift certificate for each team member. Individual players won from $10 to $25 in the drive and putting competitions. Players who did not prevail on the courses could join a raffle at the awards ceremony for a chance at winning gift certificates for local businesses including Armadillo’s and Meadowood.

The only trophy up for grabs was the Service Club Championship perpetual trophy given to the top Napa Valley service club foursome. When asked if the trophy rotated every year, a member of the St. Helena rotary remarked, “Well, it doesn’t really rotate. We just hang onto it.” His prediction was correct, and his club took home the hardware for the sixth year in a row.

The biggest prize of the day would have been a 2007 Chevy Equinox, compliments of Epps Chevrolet-Pontiac, who offered the car to any golfer who hit a hole-in-one on the fifteenth hole. The SUV crossover, parked strategically alongside the 165-yard par three, nearly had a new owner when a shot by Chuck Adams of the St. Helena Hospital team rimmed out of the cup to the gasps of witnesses.

Though no one won the car, it was not for lack of confidence. Carleen Mitchell, pondering her all-women foursome’s chances of sinking a hole-in-one, wondered, “Do they have four cars?”
Prev ArticleNext Article

Golfing for a Good Cause