The Vernon Nye Lecture Hall: Dedicated to an Art Giant 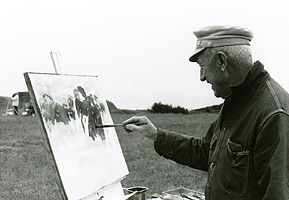 On December 18, the San Joaquin Country Club in Fresno, California, was bustling with friends celebrating the 90th birthday of artist and Pacific Union College professor emeritus of art Vernon Nye. His former students brought paintings, at his request; their artworks, along with several of Nye’s, leaned against the walls and the many windows in informal gallery style. Meanwhile, there was a perpetual line of friends, family members, and former students waiting to get a moment’s conversation with the hero of the event.

When the convivial milling around was interrupted for a segment of speeches, PUC President Richard Osborn stood to make a special presentation to Nye. Osborn read a letter on behalf of PUC Vice President for Student Services Lisa Bissell Paulson, in which she said, “You are an absolute wonder of a man. Gifted and talented beyond compare, your life has been a gift to us all. Your beautiful and astonishing pieces have graced our homes, our calendars, our mantels...and most importantly, our lives.” Osborn then presented Mr. Nye with a special tribute, announcing that the classroom in the Rasmussen Art Gallery has been dedicated as the “Vernon Nye Lecture Hall.”

The honor is certainly well placed. There wasn’t much in the way of an art department at PUC before Nye.  “When I got to PUC,” he recollected, “I was taken to the basement of West Hall and shown a room with a large table. In the room were some old, dusty, dilapidated drawing easels.” By the time Nye left PUC, the art department was well established in Fisher Hall with a commercial art studio serving as the base for The California Art Service, and the Albion Summer School of Art, which still offers annual summer classes.

In addition to leadership, Nye brought a good-natured spirit to PUC—and all his teaching endeavors—that endeared him to his students. “He always has a funny story to tell,” said Jacquelyn Hewitt, a 2003 PUC art alumna. Carol (Quade) Kaufman, '55, noted, “He was always so inspiring because he could talk a mile a minute, tell jokes, and paint at the same time." If anybody in a painting group complained about the painting site, Nye would say, “You can paint anywhere you can throw a dead cat.”

But despite his distinct sense of humor, Nye has always been a serious artist. His path down the professional art road began when he started illustrating books at the Review and Herald, where he shared a studio with Harry Anderson. After that his art positions included free-lance projects such as posters for the U.S. Treasury Department and the Department of Defense, staff illustrator for the Federal Civil Defense Department, chairman of the PUC art department from 1955 to 1976, leader of various classes and art tours across the U.S. and around the world, and art faculty member at Walla Walla College until his retirement in 1982.

All along, Nye has continued to create his own art. Even now, enjoying retired life in Fresno, Nye continues to paint and exhibit his work in California galleries. Through the years, his work has been exhibited and awarded in national exhibitions across U.S., and he is an elected member of the American Watercolor Society. PUC awarded Nye a Doctor of Letters honoris causa, and Atlantic Union College granted him an honorary Doctor of Fine Arts.

Yet despite his impressive line-up of positions and awards, Nye is incredibly humble. When someone comments on his talent, Nye’s reply is apt to be, "I never used the word talent... I like to think that God gave me a carload of interest instead."
Prev ArticleNext Article