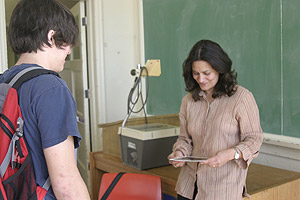 Dr. Victoria Mukerji, associate professor of visual arts at Pacific Union College, has been awarded a prestigious Fulbright scholarship to teach at Goa University in India for six months.

Mukerji applied for the highly competitive scholarship over nine months ago, but hardly told a soul—she was so sure she didn’t stand a chance of winning that she didn’t even tell her parents that she had applied. She says she has dreamed of getting a Fulbright scholarship since she was a little girl (her parents had friends who were Fulbright scholars), and the news that she had been chosen cheerfully took her by surprise. “I’m very, very happy,” she said.

The Fulbright Scholar Program is sponsored by the U.S. Department of State and aims to foster understanding between countries through scholarly exchanges. Each year about 800 scholars from the United States are awarded lectureships to schools in more than 150 participating countries. In return, about 800 international scholars are sponsored through the program to teach or conduct research in American universities.

Mukerji will be returning to her first love in India. Although she was raised in the United States, her father is Indian and she has spent the majority of her adult life in India. While she was working on her dissertation for her Ph.D in anthropology from UC Berkeley, she went to India for her research into intellectual identity formation in the post-colonial world. She ended up spending 18 years in India working as an anthropologist, filmmaker and advertising executive. “I made a commitment to India,” she said. “I’m thrilled to be going back.”

While Mukerji studied many aspects of India, the state of Goa is one geographic and cultural area that remained a bit of a mystery to her. Goa has an unusual colonial history. While most of India was colonized by the British, Goa remained under Portuguese control until 1961. Mukerji produced a documentary about the cathedrals of Goa for the Smithsonian and her experience in Goa left her wanting to know more.  “The place I’m going to is unique in India,” Mukerji said. “I know India pretty well, having lived there for so long, but this is Christian and Portuguese India—it’s very different.”

Besides the rich opportunity to explore the cultural influences in Goa, Mukerji is excited about how her film and media background will be put to good use. The International Film Festival of India has just made Goa its permanent home with the goal of becoming the Cannes of Asia. The anthropologist in Mukerji is anxious to observe the effect of this event on the local population. “What impact is this high profile, globalized, celebrity attraction going to have on the local culture? And how is the indigenous culture going to effect this event?”

Part of Mukerji’s primary assignment at Goa University will be to help establish a curriculum in media and culture where such questions can be addressed deliberately. “The university is an ideal place to look at these sorts of things intentionally,” she said.

The whole impact of globalization on Indian culture actually has Mukerji a bit worried. She hasn’t been to India in eight years, and those eight years have been full of momentous change. The prospect of seeing the golden arches of McDonald’s and billboards advertising American products on every street corner has her worried. “I’m going to see India eight years after radical economic globalization,” she said. “That frightens me. I know what to expect, but I’m not looking forward to it.”

Although she is happy to be returning to India, Mukerji is already feeling nostalgic. She admits to being completely “sappy” about the thought of not seeing her students for most of next school year. “I wonder what I’m going to do without ‘my kids,’” she said. “I start thinking about having to say good-bye to the seniors, and not getting to meet the new freshman.” Her voice trails off. “I’m really going to miss PUC.”

Mukerji started teaching at PUC eight years ago and her broad background is put to use in several departments. In addition to teaching for the visual arts department, she also teaches for the communication department, the psychology and social work department, and the honors program.

Over the years, she has discovered that she loves teaching. When her documentary film class premiered a film last week, she poignantly talked about how proud she is to see her students’ accomplishments. “I thought the highest emotion, the proudest moment, would come from seeing my film completed,” she said. “But I was wrong. The proudest moment comes when you see students that you have helped nurture complete their project.”

The last Fulbright Scholar at PUC was Dr. Eric Anderson, who taught at Ionian University in Greece in 1992. Richard Osborn, president of PUC, notes that besides the prestige that a Fulbright scholarship brings to PUC, the award helps broaden the horizons for PUC students. “By being a Fulbright Scholar, Dr. Mukerji will take to India the same inspiration she has given many students,” Osborn said. “In return, she will bring back to PUC new insights that will further strengthen our campus.”
Prev ArticleNext Article