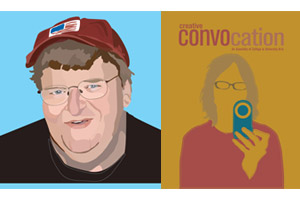 The artwork was completed for Illustration I, a class required for graphic design majors. Milbert Mariano, who teaches the class, encouraged students to submit their projects to Creative Convocation, which accepts submissions from students in undergraduate or graduate programs throughout the United States and Canada.

Murtaugh, a senior graphic design and photography major, chose a piece that exemplifies his social consciousness. He says he selected Moore as the subject of his piece because he is an interesting figure in the political world and is famous for his filmmaking. “About this time his new film had come out criticizing the war in Iraq and the Bush presidency,” Murtaugh explains. This specific subject “forced the viewer to think about the situation in Iraq and the consequence of war even if they agree or disagree with Moore’s point of view.”

Last school year Creative Convocation held a competition to create a cover for their magazine. Mariano’s students designed a magazine cover as a project for the Illustration class. Kenyon, a junior graphic design major who is also in the PUC Honors Program, turned in his piece, and it was listed first in the honorable mention category.

These two students’ achievements show “that our students have the capabilities and talents to produce work that is judged critically enough to make national magazines,” said Mariano, associate professor of graphic design.