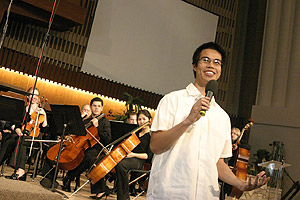 Godfrey Miranda, a 2005 PUC graduate, returned to share his original musical composition with students at the first colloquy of spring quarter. His homecoming featured a successful first performance of In the Beginning: a Symphonic Suite. Performed by the PUC Orchestra and conducted by Rachelle Berthelsen Davis, this five-part movement is based on the five themes of John Milton’s book Paradise Lost.

The theme of each movements portrayed a section of the book using both visual and sound elements. The text and graphic representations displayed on the overhead screen followed the story behind each movement. One movement featured a jazz duet between the clarinet and flute representing Satan’s temptation of Eve at the Tree of Knowledge of Good and Evil. Before the first and fourth movement, Miranda’s enthusiasm for the subject barely kept him in his seat and he jumped up to explain the emotions and thoughts tied into each individual work.

This was the first time Miranda heard the entire piece played live (he composed it using his computer and synthesized instruments), and his excitement was evident before and during the performance. When the performance ended Miranda’s reaction was pure joy. “Oh wow! That was rich,” he said. “The depth of the sound, the fullness of it—it was a lot more moving than I thought it would be.”

Miranda graduated with Honors and a degree in theology. The idea for his symphonic suite sparked after Miranda read Paradise Lost while traveling in England with the Honors program. In 2004, Miranda took an orchestration class at PUC and wrote the first movement for his final project. With encouragement from Ken Narducci, professor of music, Miranda began putting the remaining four movements onto paper in spring of 2005 for his Honors project.

Miranda has had the support of teachers and peers both as a student and alumnus. Rachelle Davis, conductor of the Orchestra and one of Miranda’s honors teachers, appreciates his talent and attitude. “Godfrey is very thoughtful and helpful and has a great sense of humor—he doesn’t take himself too seriously!”

Students were also impacted by the event. Davis felt it was great for students to play a piece by a peer and has heard music majors say, “If Godfrey can do this, maybe I should try to compose something.”

Miranda currently works as a pastor in the Central California Conference with his wife Debbie, also a PUC graduate, in youth evangelism.
Prev ArticleNext Article