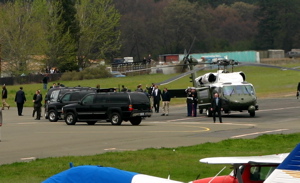 During President George W. Bush’s four-day visit to California, Angwin unexpectedly became the center of the media's attention. After days of press speculation as to where Bush would land for his brief visit to the Napa Valley, military helicopters touched down at the Angwin Airport on Friday—contrary to numerous presidential advance team reports. As of Friday, Pacific Union College officials had received confirmation that the president would not be arriving in Angwin, despite practice landings earlier in the week. With Angwin out of the picture, the valley swirled with rumors that the entourage would be arriving at a St. Helena elementary school, where practice runs had also been held, or at a private resort.

But around 6 p.m. Friday, a train of law enforcement vehicles began zipping up Howell Mountain Road and towards the airport. Close to 8 p.m., helicopters could be heard roaring through the dark sky. Ten minutes later, a motorcade sped past a modest gathering of citizens who had caught on that the president of the United States would be driving through their quiet little town.

The excitement continued early Saturday morning when residents noticed a number of cars making their way to the Los Posadas State Forest that surrounds the PUC campus and boasts some of the best bike trails in the region. Already, the media had described the presidential mountain bike being loaded onto Air Force One. Anticipating that the president, a mountain biking enthusiast, would be riding in Angwin, a handful of people braved the morning cold and fog at the Cold Springs Road and Los Posadas Road junction for a glimpse of the president. At about 10:15, a small motorcade cruised down the street; Bush, seated in one of several black SUVs, waved at cheering onlookers.

Soon after, Angwin’s residents gathered once more—this time at the airport—in anticipation of the president’s departure. Media reports confirmed that Bush was scheduled to be in Sacramento by mid-afternoon, continuing his tour through California, which began in San Jose and will end in Southern California.

The boldly curious, bundled in thick jackets, surrounded the airport property, being careful not to ruffle the dozens of secret service policing the perimeter. Others stood in their front yards, waiting to hear the telltale rumble of Marine One.

At 1 p.m., four enormous choppers landed at the airport. Twenty-five minutes later, the aircraft lifted into the sky, churning up clouds of red dust. And within seconds, they were gone, ending Angwin's weekend brush with the president.

According to an article in the Napa Valley Register, Bush is the first president to make an official visit to Napa County. In the past, only former presidents have toured this area. However, this isn't Angwin's first visitor from the current White House administration. Last year, Vice President Dick Cheney also flew into the Angwin Airport during a visit to St. Helena.

The Angwin Airport is part of PUC, which offers a bachelor of science degree in aviation. The airport also offers ground schools and flight instruction to individuals in the community. PUC is a four-year liberal arts college, affiliated with the Seventh-day Adventist Church. PUC focuses on undergraduate education and has consistently ranked in the top tier for Western comprehensive colleges in U.S. News & World Report.
Prev ArticleNext Article