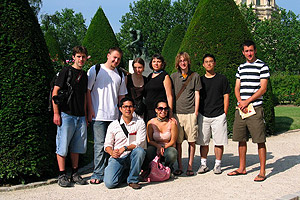 Set against the backdrop of towering cathedrals and pristine palatial gardens, seven Pacific Union College students completed a two-week trip to Paris, France as part of the Honor program’s Summer Term Abroad. “Beauty,” a required course for Honors students, explores ideas about art and aesthetics as developed within Western culture.

The course started at the PUC campus in late June with an intensive week of classroom lectures and discussions based on readings from writers such as Edmund Burke and Virginia Woolf. The class then traveled to Paris for two weeks of learning “on location.” The itinerary included visits to the Louvre, one of the world’s largest and most expansive art museums, and Giverny, the residence and garden of impressionist artist, Claude Monet.

“The course is not only a study of art history, but an examination of how we define beauty and aesthetics and how our definitions shape our perceptions of the world,” says Milbert Mariano, chair of the visual arts department. He teaches the course with Nancy Lecourt, who is transitioning from the English department to her new role as Academic Dean this summer.

While their stay in France was relatively brief, the students immersed themselves in Parisian culture by learning to order at restaurants in French, exploring the cobblestone streets on foot, and celebrating Bastille Day at a parade. The students also experienced firsthand the world’s obsession with soccer; during their stay, Paris exuded with the frenzied joy of making the World Cup finals.

Afterwards, many of the students remained in Europe for additional touring not related to the course. However, the class will reconvene in Angwin later this summer to turn in final projects.

In its fourth year abroad, this is the first time “Beauty” was taught in Paris. In the past the session has been held at the Adventist campuses of Newbold College in Binfield, England and Villa Aurora in Florence, Italy.

The Honors Program at PUC offers academically motivated students an alternative General Education curriculum built around the study of the great works of world culture. Honors students explore central themes in the sciences and liberal arts through discussion of works ranging from Homer’s Odyssey to Mozart’s Requiem, from the Analects of Confucius to Emily Dickinson’s poetry, from the Bible to the Dialogues of Galileo. Students must maintain a specified GPA to remain in the program.
Prev ArticleNext Article