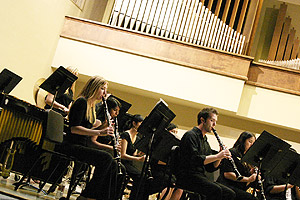 Raboy’s impressive conducting career includes serving as the music director of the Napa Valley Symphony since 1990, traveling as a guest conductor, conducting the Diablo Ballet, and serving as assistant conductor of the Santa Rosa Symphony, the Hudson Valley Philharmonic, and the Binghamton Symphony. He has also worked with several youth orchestras over the years.

In addition to his conducting experience, Raboy has also composed a wide range of works (including several pieces for bands, wind symphonies and wind ensembles), lectured for the New York Philharmonic, and worked as a staff writer for the Putnam Funds of Boston.

Meanwhile, Raboy is a fan of teaching. “Education is a big deal to me,” he says. “I have always loved to teach and enjoy the give-and-take with students so much.” Raboy has taught students from a variety of backgrounds and from ages four all the way up through college level. “I find the enthusiasm of students really refreshing,” he explains. “Their ability to make great gains, their willingness to explore new territory—it’s very rewarding and exciting.”

Music department chair Lynn Wheeler feels that Raboy’s experience, energy, and skills as a communicator will be a dynamic presence on the campus music scene. “Students are going to receive a very hands-on approach to music,” he says. “I think they will really find that Raboy is an enthusiastic teacher who brings a great deal to their classes.”

“I’m very excited to be working with the Wind Ensemble,” says Raboy. And he’s no stranger to the college, having brought the Napa Valley Symphony to play in the PUC Church several times. He’s also acquainted with such campus individuals as retired Paulin Center for the Creative Arts director Lois Case, who served on the Symphony board, and music professors Ken Narducci and Rachelle Davis, who have both played under Raboy’s direction. “Raboy has so much charisma, and he has a passion for quality,” says Davis. “I’m excited about the opportunity our students have to work with someone who has so much experience.”
Prev ArticleNext Article