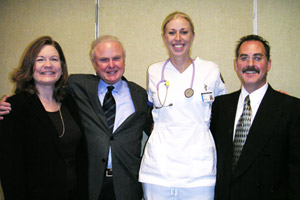 At a luncheon on Friday, November 11, Pacific Union College nursing student Jennie Oldenkamp received a $2,000 award as the first recipient of the Hilary Blount RN Scholarship. Hilary Blount Gregory was a registered nurse who lived in the Napa Valley, worked at St. Helena Hospital, and graduated from PUC in 2000. Blount Gregory passed away in a car crash on Silverado Trail on July 4.

“I thought it was a wonderful selection,” said Milli Stelling, mother of Blount Gregory. “Hilary was such a dedicated and outstanding nurse, and I think Jennie has so many of her qualities. All of us [Hilary’s father Gary and his wife Lee, and Stelling’s husband, Rob] were very impressed with Jennie.”

In an emotional ceremony, Oldenkamp, a cancer survivor, told the assembled family and United Hospital representative Mike Inserra that though the money was really important, even more important to her is the fact that someone believes in her—a single mother of two daughters, aged four and six.

“The feelings were so raw. These people just lost their daughter, and here they were, reaching out to me,” reflected Oldenkamp, who upon learning about PUC’s nursing program in October 2004, decided to apply to create a better life for her own daughters. “I’m still in awe. I’m telling everyone about it to inspire them. I’m so honored to have met [Hilary’s family].”

John Collins, PUC’s vice president of finance, expressed his appreciation for the new  scholarship: “We want to thank the family of Hilary Blount Gregory for helping to make PUC a place where students from all walks of life can receive a quality, Christian education.”

Oldenkamp plans to use the scholarship directly for textbooks.
Prev ArticleNext Article