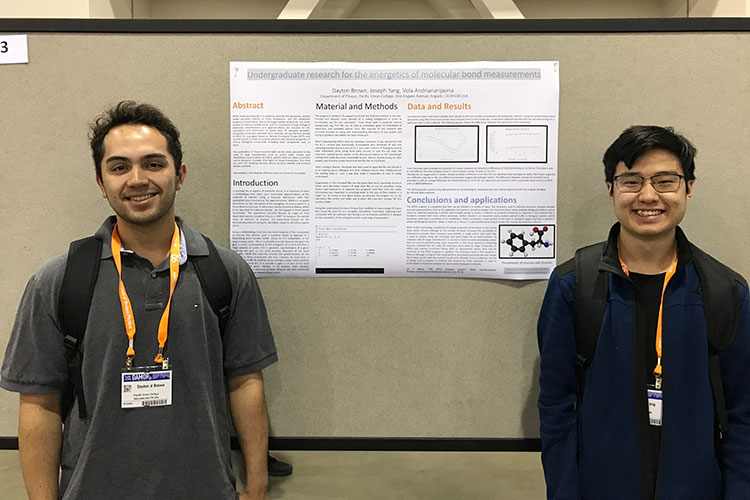 Yang and Brown attended the 50th annual meeting of the APS Division of Atomic, Molecular, and Optical Physics. Their poster presented research on molecular bond measurements, the abstract of which is expected to be published in the Bulletin of the American Physical Society.

“Attending and presenting at conferences is an important way to keep current in your topics of preference,” says Vola Andrianarijaona, professor of physics at PUC. “The students will not be able to understand everything they hear, but they will be aware of the advancement from first-hand researchers, they will attend sessions alongside Nobel Prize winners, and will be inspired by other posters and student work. It is a form of education that cannot be achieved by staying on campus.”

After listening to several physicists from around the world presenting on various topics, the students concluded there aren’t enough of them.

“We need more physicists!” says Kelsey Hadfield, who presented a poster at an APS conference earlier in spring quarter. “There’s so much we still don’t know and so many fascinating parts of our world to study.”

Andrianarijaona stresses conferences such as those with the APS are an essential component in determining career goals. At these events they are exposed to options they may not have encountered otherwise. It also forces students out of their comfort zone and requires them to think differently.

“At their home college they face their peers and teachers, but at a conference they are dealing with people they don’t know,” he says. “They cannot predict their questions, comments, interests, etc., and they have no idea what kind of background anyone has—are they students, professors, physicists, mathematicians, biochemists? So they’re put on the spot, they do their best, and sometimes as a result they earn offers from graduate supervisors or meet their future advisors. With attending these events comes great opportunity.”

Once they complete their studies, Hadfield plans to do research, and Yang hopes to start his own business with fellow med school students to test out some of his self-proclaimed “crazy ideas.”

“No matter what happens at these poster presentations, it feels like a successful journey,” says Andrianarijaona. “For most, it’s the first taste of something they’ll enjoy doing again and again. It’s a window into their future.”

For more information about physics at PUC, visit puc.edu/physics.